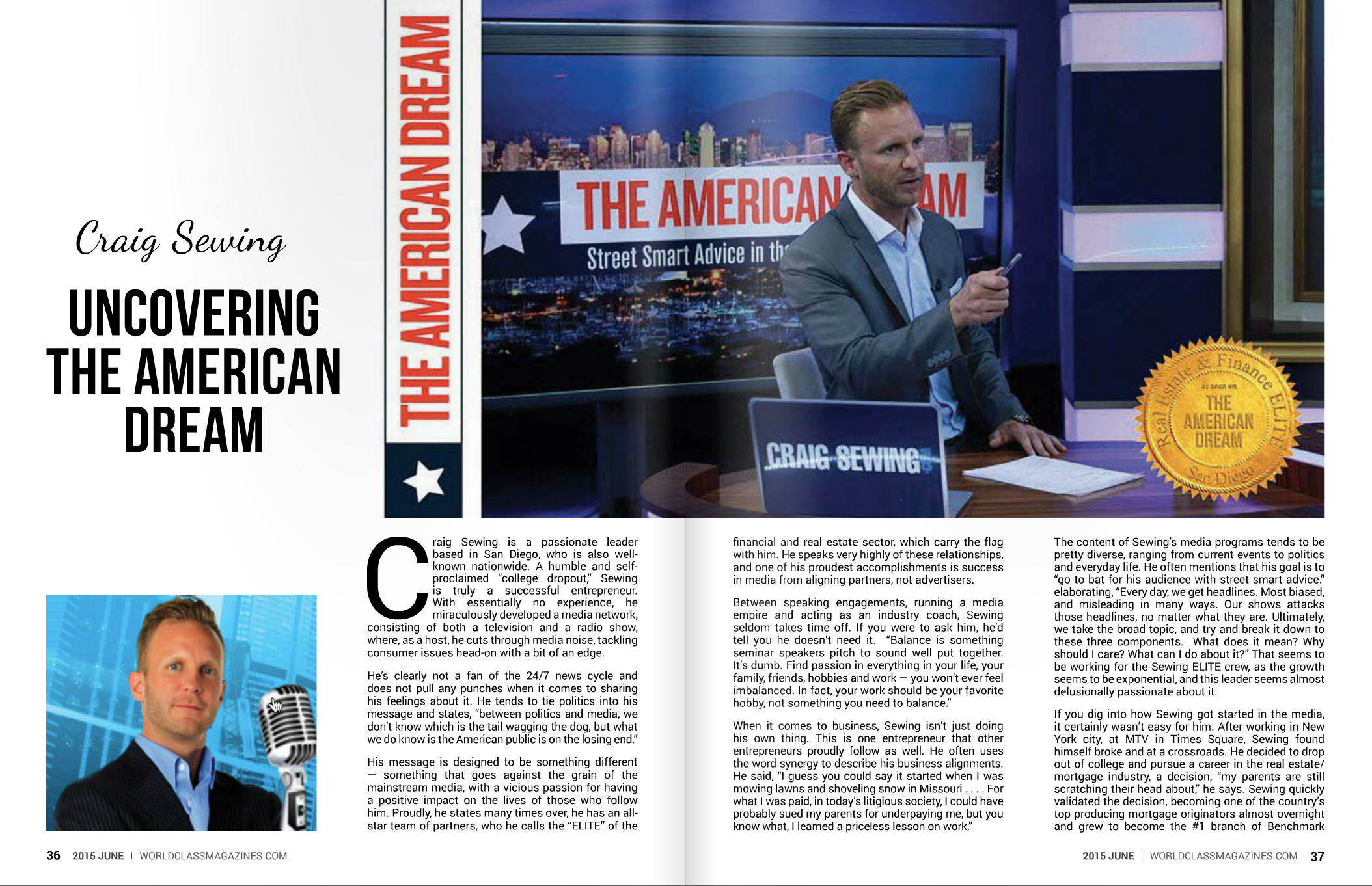 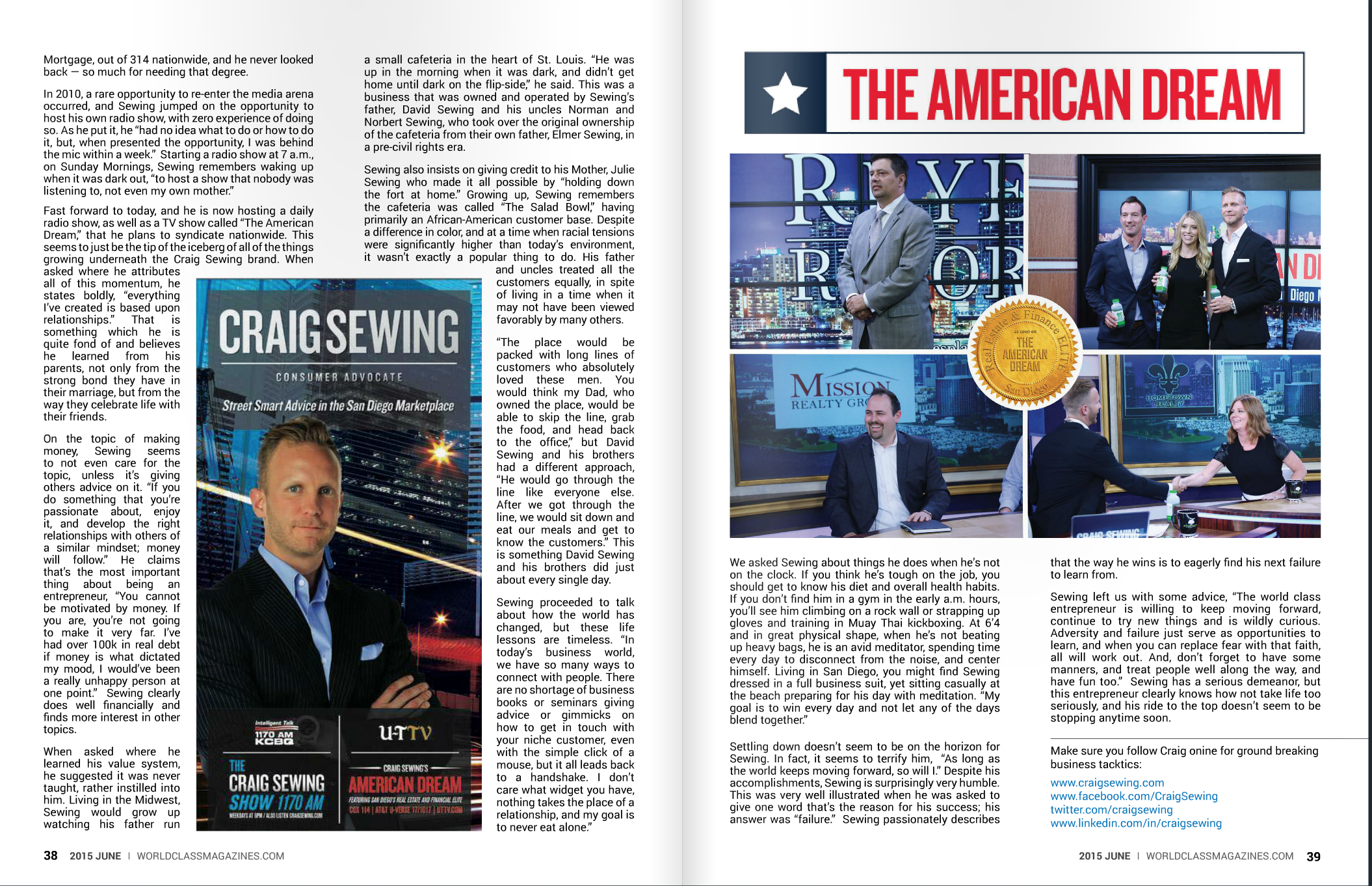 Craig Sewing is a passionate leader based in San Diego, who is also well-known nationwide. A humble and self-proclaimed “college dropout,” Sewing is truly a successful entrepreneur. With essentially no experience, he miraculously developed a media network, consisting of both a television and a radio show, where, as a host, he cuts through media noise, tackling consumer issues head-on with a bit of an edge.

He’s clearly not a fan of the 24/7 news cycle and does not pull any punches when it comes to sharing his feelings about it. He tends to tie politics into his message and states, “between politics and media, we don’t know which is the tail wagging the dog, but what we do know is the American public is on the losing end.”

His message is designed to be something different — something that goes against the grain of the mainstream media, with a vicious passion for having a positive impact on the lives of those who follow him. Proudly, he states many times over, he has an all-star team of partners, who he calls the “ELITE” of the financial and real estate sector, which carry the flag with him. He speaks very highly of these relationships, and one of his proudest accomplishments is success in media from aligning partners, not advertisers.

Between speaking engagements, running a media empire and acting as an industry coach, Sewing seldom takes time off. If you were to ask him, he’d tell you he doesn’t need it.  “Balance is something seminar speakers pitch to sound well put together. It’s dumb. Find passion in everything in your life, your family, friends, hobbies and work — you won’t ever feel imbalanced. In fact, your work should be your favorite hobby, not something you need to balance.”

When it comes to business, Sewing isn’t just doing his own thing. This is one entrepreneur that other entrepreneurs proudly follow as well. He often uses the word synergy to describe his business alignments. He said, “I guess you could say it started when I was mowing lawns and shoveling snow in Missouri . . . . For what I was paid, in today’s litigious society, I could have probably sued my parents for underpaying me, but you know what, I learned a priceless lesson on work.”

The content of Sewing’s media programs tends to be pretty diverse, ranging from current events to politics and everyday life. He often mentions that his goal is to “go to bat for his audience with street smart advice.” elaborating, “Every day, we get headlines. Most biased, and misleading in many ways. Our shows attacks those headlines, no matter what they are. Ultimately, we take the broad topic, and try and break it down to these three components.  What does it mean? Why should I care? What can I do about it?” That seems to be working for the Sewing ELITE crew, as the growth seems to be exponential, and this leader seems almost delusionally passionate about it.

If you dig into how Sewing got started in the media, it certainly wasn’t easy for him. After working in New York city, at MTV in Times Square, Sewing found himself broke and at a crossroads. He decided to drop out of college and pursue a career in the real estate/mortgage industry, a decision, “my parents are still scratching their head about,” he says. Sewing quickly validated the decision, becoming one of the country’s top producing mortgage originators almost overnight and grew to become the #1 branch of Benchmark Mortgage, out of 314 nationwide, and he never looked back — so much for needing that degree.

In 2010, a rare opportunity to re-enter the media arena occurred, and Sewing jumped on the opportunity to host his own radio show, with zero experience of doing so. As he put it, he “had no idea what to do or how to do it, but, when presented the opportunity, I was behind the mic within a week.”  Starting a radio show at 7 a.m., on Sunday Mornings, Sewing remembers waking up when it was dark out, “to host a show that nobody was listening to, not even my own mother.”

Fast forward to today, and he is now hosting a daily radio show, as well as a TV show called “The American Dream,” that he plans to syndicate nationwide. This seems to just be the tip of the iceberg of all of the things growing underneath the Craig Sewing brand. When asked where he attributes all of this momentum, he states boldly, “everything I’ve created is based upon relationships.” That is something which he is quite fond of and believes he learned from his parents, not only from the strong bond they have in their marriage, but from the way they celebrate life with their friends.

On the topic of making money, Sewing seems to not even care for the topic, unless it’s giving others advice on it. “If you do something that you’re passionate about, enjoy it, and develop the right relationships with others of a similar mindset; money will follow.” He claims that’s the most important thing about being an entrepreneur, “You cannot be motivated by money. If you are, you’re not going to make it very far. I’ve had over 100k in real debt if money is what dictated my mood, I would’ve been a really unhappy person at one point.”  Sewing clearly does well financially and finds more interest in other topics.

When asked where he learned his value system, he suggested it was never taught, rather instilled into him. Living in the Midwest, Sewing would grow up watching his father run a small cafeteria in the heart of St. Louis. “He was up in the morning when it was dark, and didn’t get home until dark on the flip-side,” he said. This was a business that was owned and operated by Sewing’s father, David Sewing and his uncles Norman and Norbert Sewing, who took over the original ownership of the cafeteria from their own father, Elmer Sewing, in a pre-civil rights era.

Sewing also insists on giving credit to his Mother, Julie Sewing who made it all possible by “holding down the fort at home.” Growing up, Sewing remembers the cafeteria was called “The Salad Bowl,” having primarily an African-American customer base. Despite a difference in color, and at a time when racial tensions were significantly higher than today’s environment, it wasn’t exactly a popular thing to do. His father and uncles treated all the customers equally, in spite of living in a time when it may not have been viewed favorably by many others.

“The place would be packed with long lines of customers who absolutely loved these men. You would think my Dad, who owned the place, would be able to skip the line, grab the food, and head back to the office,” but David Sewing and his brothers had a different approach, “He would go through the line like everyone else. After we got through the line, we would sit down and eat our meals and get to know the customers.” This is something David Sewing and his brothers did just about every single day.

Sewing proceeded to talk about how the world has changed, but these life lessons are timeless. “In today’s business world, we have so many ways to connect with people. There are no shortage of business books or seminars giving advice or gimmicks on how to get in touch with your niche customer, even with the simple click of a mouse, but it all leads back to a handshake. I don’t care what widget you have, nothing takes the place of a relationship, and my goal is to never eat alone.”

We asked Sewing about things he does when he’s not on the clock. If you think he’s tough on the job, you should get to know his diet and overall health habits. If you don’t find him in a gym in the early a.m. hours, you’ll see him climbing on a rock wall or strapping up gloves and training in Muay Thai kickboxing. At 6’4 and in great physical shape, when he’s not beating up heavy bags, he is an avid meditator, spending time every day to disconnect from the noise, and center himself. Living in San Diego, you might find Sewing dressed in a full business suit, yet sitting casually at the beach preparing for his day with meditation. “My goal is to win every day and not let any of the days blend together.”

Settling down doesn’t seem to be on the horizon for Sewing. In fact, it seems to terrify him,  “As long as the world keeps moving forward, so will I.” Despite his accomplishments, Sewing is surprisingly very humble. This was very well illustrated when he was asked to give one word that’s the reason for his success; his answer was “failure.”  Sewing passionately describes that the way he wins is to eagerly find his next failure to learn from.

Sewing left us with some advice, “The world class entrepreneur is willing to keep moving forward, continue to try new things and is wildly curious. Adversity and failure just serve as opportunities to learn, and when you can replace fear with that faith, all will work out. And, don’t forget to have some manners, and treat people well along the way, and have fun too.”  Sewing has a serious demeanor, but this entrepreneur clearly knows how not take life too seriously, and his ride to the top doesn’t seem to be stopping anytime soon.