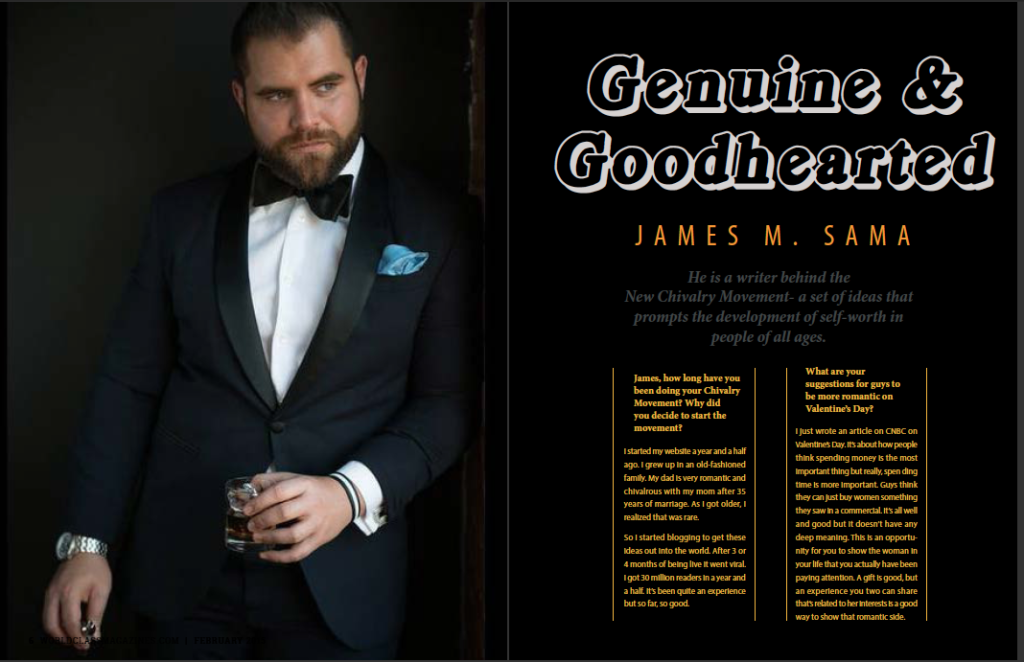 James M. Sama is a writer behind the New Chivalry Movement- a set of ideas that prompts the development of self-worth in people of all ages.

James, how long have you been doing your Chivalry Movement? Why did you decide to start the movement?

I started my website a year and a half ago. I grew up in an old-fashioned family. My dad is very romantic and chivalrous with my mom after 35 years of marriage. As I got older, I realized that was rare. So I started blogging to get these ideas out into the world. After 3 or 4 months of being live it went viral. I got 30 million readers in a year and a half. It’s been quite an experience but so far, so good.

What are your suggestions for guys to be more romantic on Valentine’s Day?

I just wrote an article on CNBC on Valentine’s Day. It’s about how people think spending money is the most important thing but really, spending time is more important. Guys think they can just buy women something they saw in a commercial. It’s all well and good but it doesn’t have any deep meaning. This is an opportunity for you to show the woman in your life that you actually have been paying attention. A gift is good, but an experience you two can share that’s related to her interests is a good way to show that romantic side.

Guys think that being nice and romantic means being weak. How can they be masculine and still be romantic?

I think that some guys take it too far. They go beyond being a nice guy and become a doormat. You can be kind and respectful and romantic and still have your own identity. Most women don’t want a guy you can pull around on a leash like a puppy. Guys make the mistake of thinking they have to cater to all her needs to keep her attention, but in reality, it’s him being himself and chasing after his own goals and dreams that’s going to keep her with him.

On the flipside, maybe they’ve been nice to women who don’t appreciate it and so they end up thinking it’s a negative thing. Be nice and stay true to who you are until you find a woman who appreciates it. When you do it’ll be worth it. 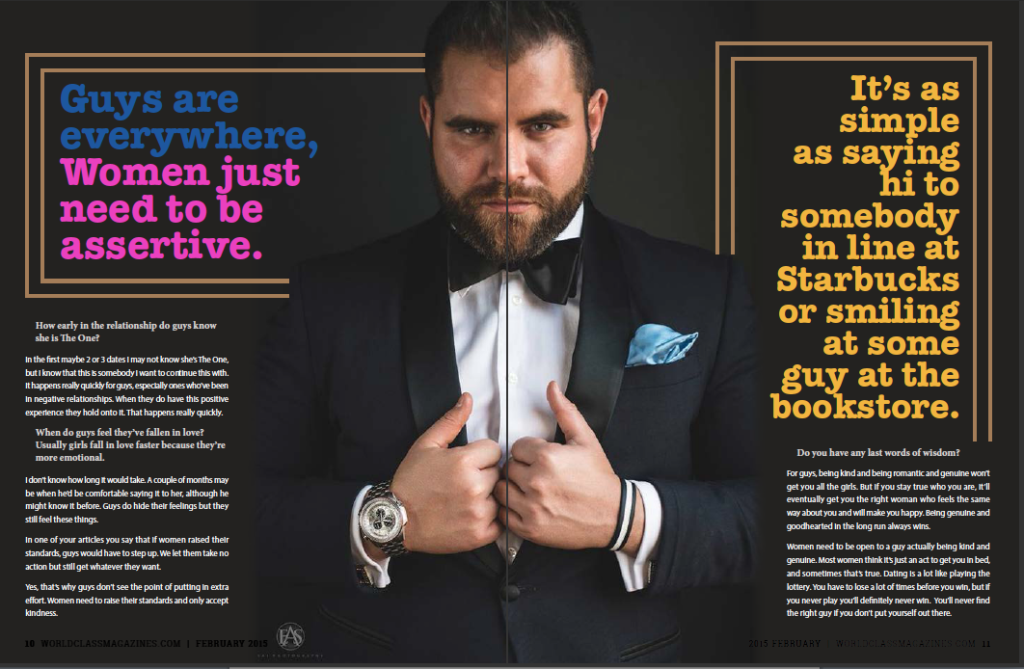 Sometimes women have a hard time letting of being in charge. Understand that you can give up control in your relationships. You can be a woman and let a man be a man. It doesn’t mean sacrificing your power in the workplace. It doesn’t take away from your independence or your strength.

I agree with driver/passenger roles but it differs with certain areas of life. One person won’t be driver in every single situation because people have naturally different skills and talents.

What traits do guys like most in their girlfriends?

Traditionally guys are the pursuers and put in the most effort. Guys feel like they give and give and give. Making a guy feel desired and appreciated often gets overlooked. Small things like compliments go a long way. Tell him thank you for anything from taking out trash to taking you on a trip. That’s really all most guys want.

Do you think that guys should pay on the first date?

After a few dates a woman can pay. It’s a good way of showing she’s willing to contribute and be a part of this. However, it’s nice to offer to pay on first date, even if the man won’t let you. Sitting there while he takes care of the bill might send the message that you’re expecting to be taken care of and you might come across as being too entitled. Most guys are hesitant of being taken advantage of.

How long should you date other people before deciding to be exclusive?

A guy knows on the first or second date if he wants to be exclusive. If a guy still doesn’t know after a month, then he doesn’t really want to be with you. As a woman, if you’re unsure of where he stands, more than a month shouldn’t go by before having that conversation. If he hasn’t done so yet then you can bring it up. You have to know if you’re wasting your time. Bring it up, see what he says.

When making that decision, what traits are guys looking for in a woman?

A man wants a woman who challenges him on an intellectual level. He wants a woman who is ambitious and has her own life. If he’s thinking long term, he’s picturing her raising his children. There are a lot of answers to this question but I think it comes down to kindness and being genuine. Can you see yourself in a rocking chair with this person in 50 years? 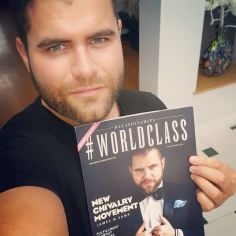 Where do we meet guys like you who are masculine but romantic and kind and loving?

Not in clubs. There are some good people in clubs but guys in clubs typically aren’t looking to settle down. Charity events and fundraisers are more mature and formal. The people who are there want to help others and make a difference. But really, guys are everywhere; women just need to be assertive. It’s as simple as saying hi to somebody in line at Starbucks or smiling at some guy at the bookstore. To a lot of guys that’s enough of a trigger to get him to come over.

What about the guys that are too intimidated by good-looking, powerful women to approach them? How does a woman let a man know she’s interested without chasing him?

A smile or friendly expression can break down the wall of intimidation. Then it’s up to him. Give him the opportunity to come up to you. Let him know it’s welcome. A smart guy will take that hint.

Some guys are too scared of rejection to ask for a woman’s phone number. Is it okay for her to bring up exchanging numbers?

If he doesn’t ask then I think it would be okay. It’s nothing to be too hesitant about.

Do you have any secrets to make a guy want to commit?

I think that feeling appreciated and valued is a big part of it. In my experience, most guys want to be a provider and want to make someone happy. Secondly, when you’re with someone and you’re comfortable, you enjoy your time together, you know that this is the person that you want to at least give it a shot with. It’s more emotional than logical.

How early in the relationship do guys know she is The One?

I don’t know how long it would take. A couple of months may be when he’d be comfortable saying it to her, although he might know it before. Guys do hide their feelings but they still feel these things.

In one of your articles you say that if women raised their standards, guys would have to step up. We let them take no action but still get whatever they want.

Yes, that’s why guys don’t see the point of putting in extra effort. Women need to raise their standards and only accept kindness.

Do you have any last words of wisdom?

For guys, being kind and being romantic and genuine won’t get you all the girls. But if you stay true who you are, it’ll eventually get you the right woman who feels the same way about you and will make you happy. Being genuine and goodhearted in the long run always wins.

Women need to be open to a guy actually being kind and genuine. Most women think it’s just an act to get you in bed, and sometimes that’s true. Dating is a lot like playing the lottery. You have to lose a lot of times before you win, but if you never play you’ll definitely never win.  You’ll never find the right guy if you don’t put yourself out there.