Samantha Chambers: Ditch the Ladder and Make the Leap to Entrepreneurship 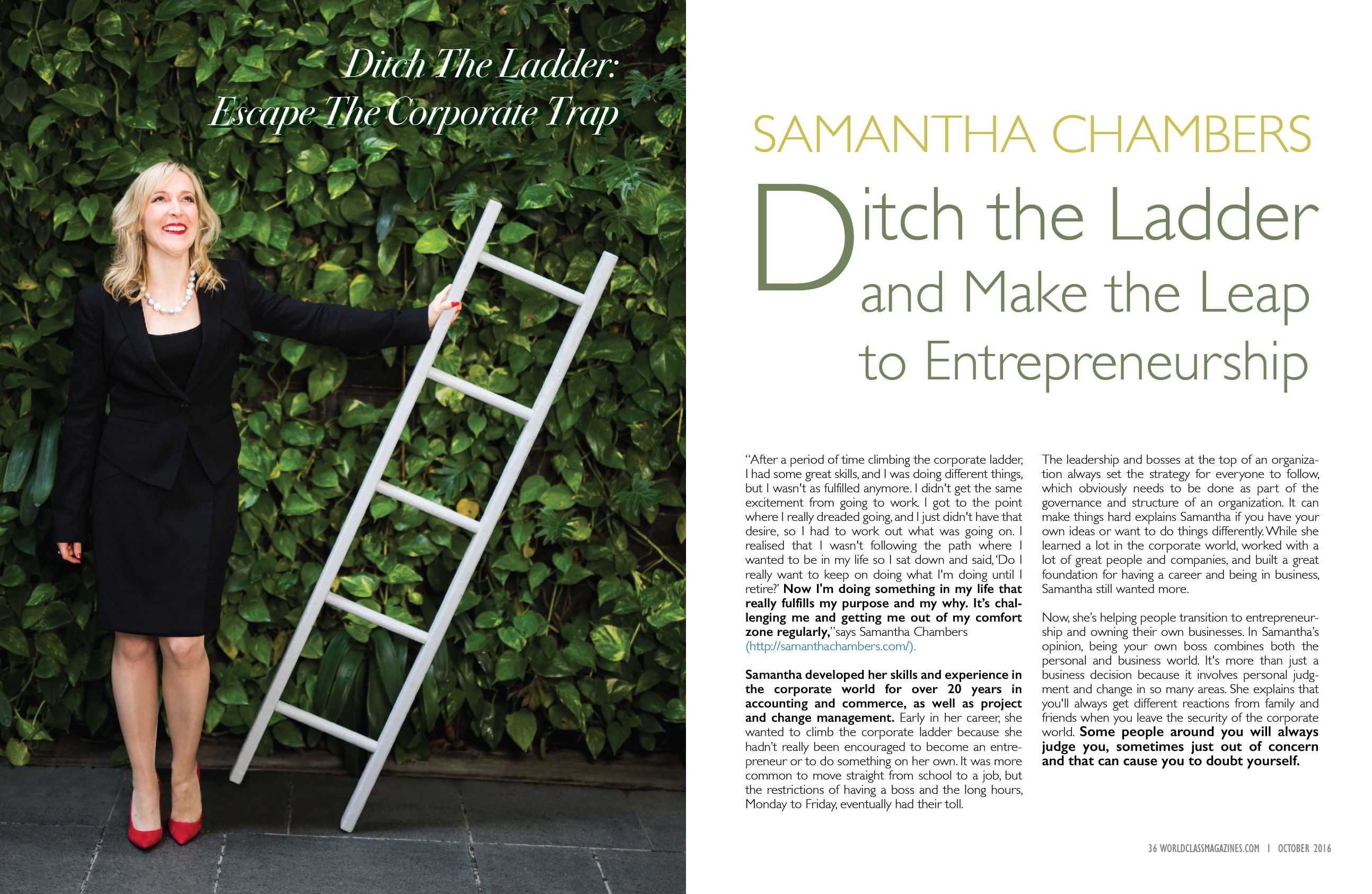 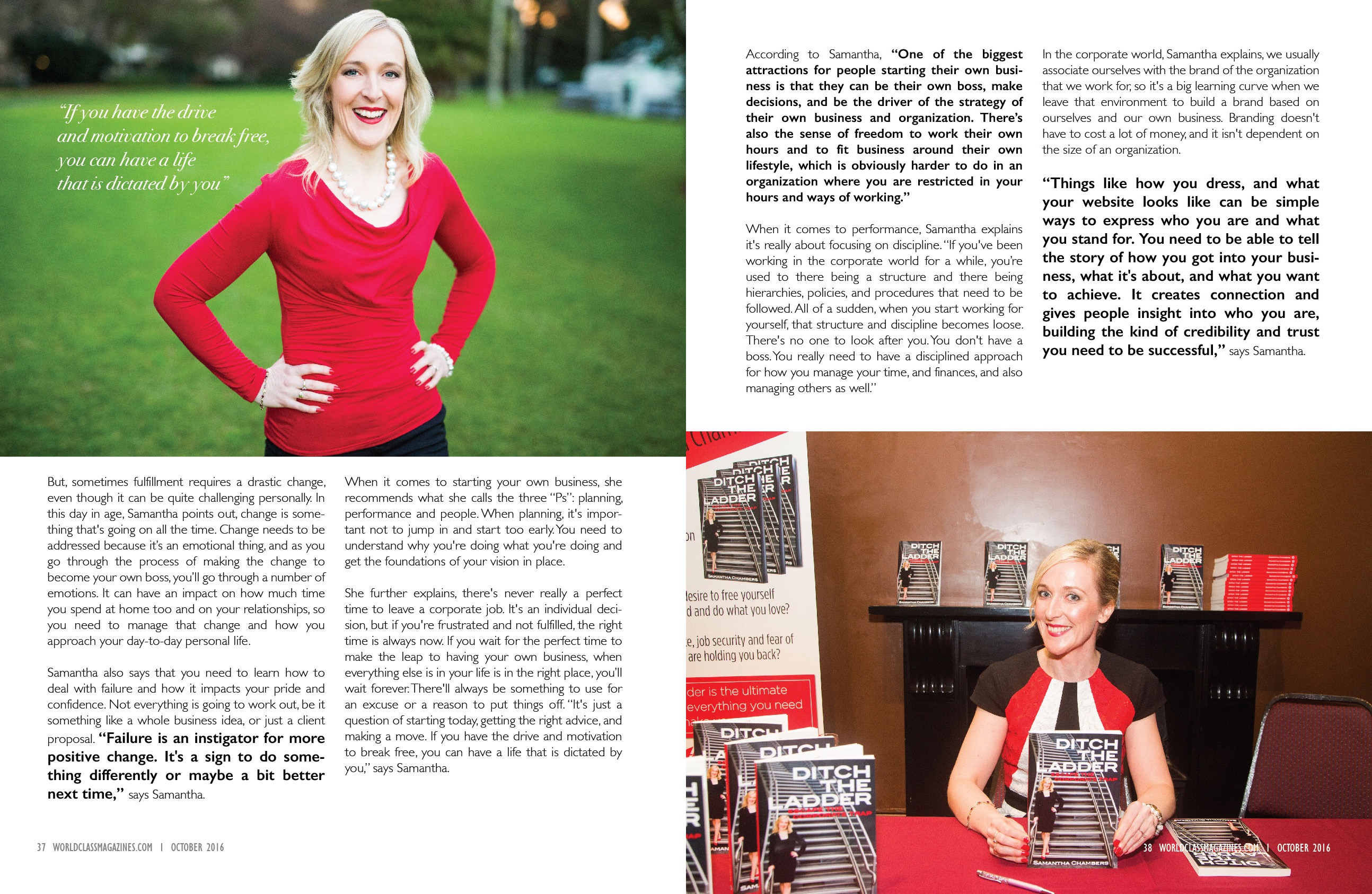 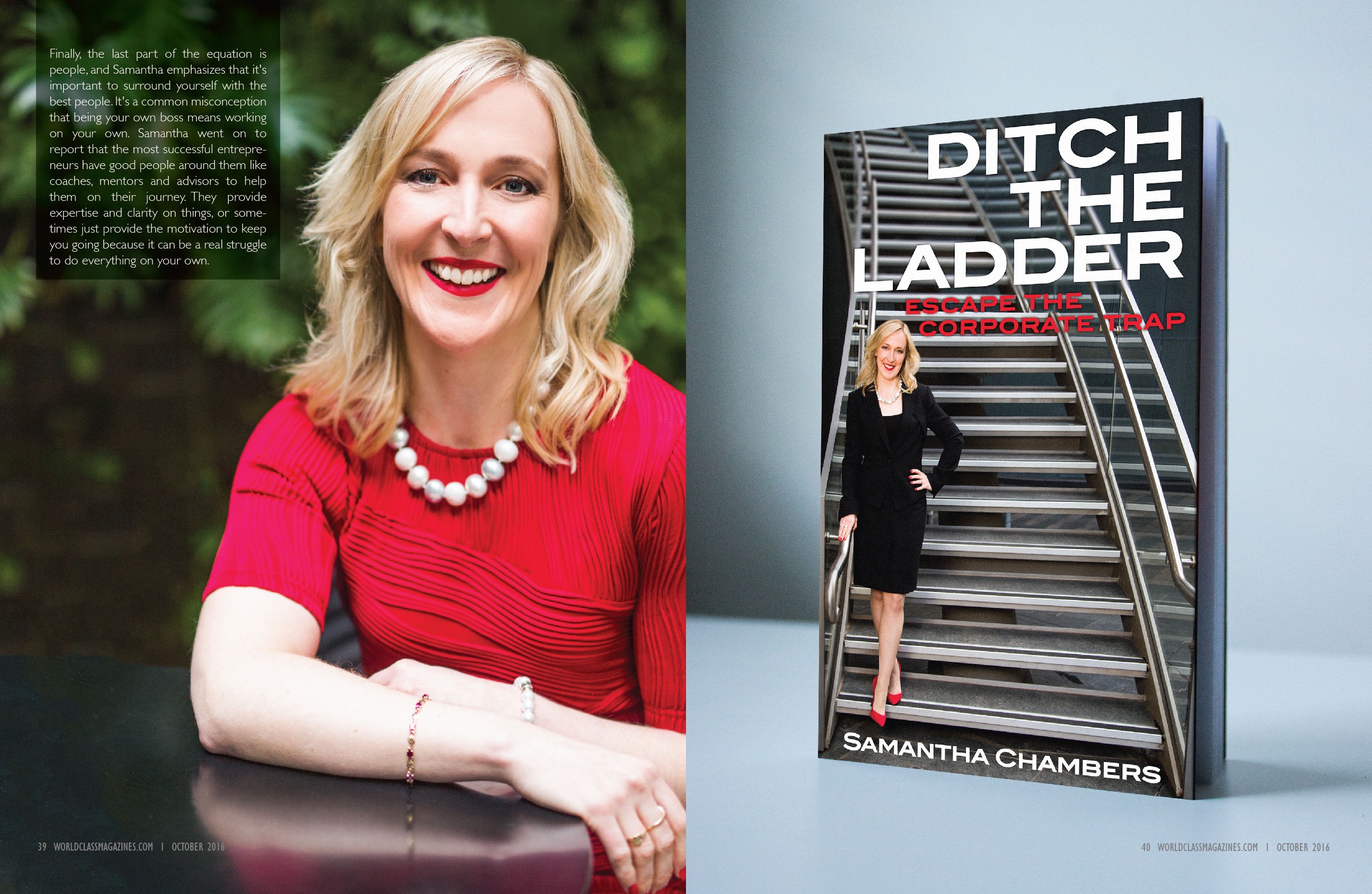 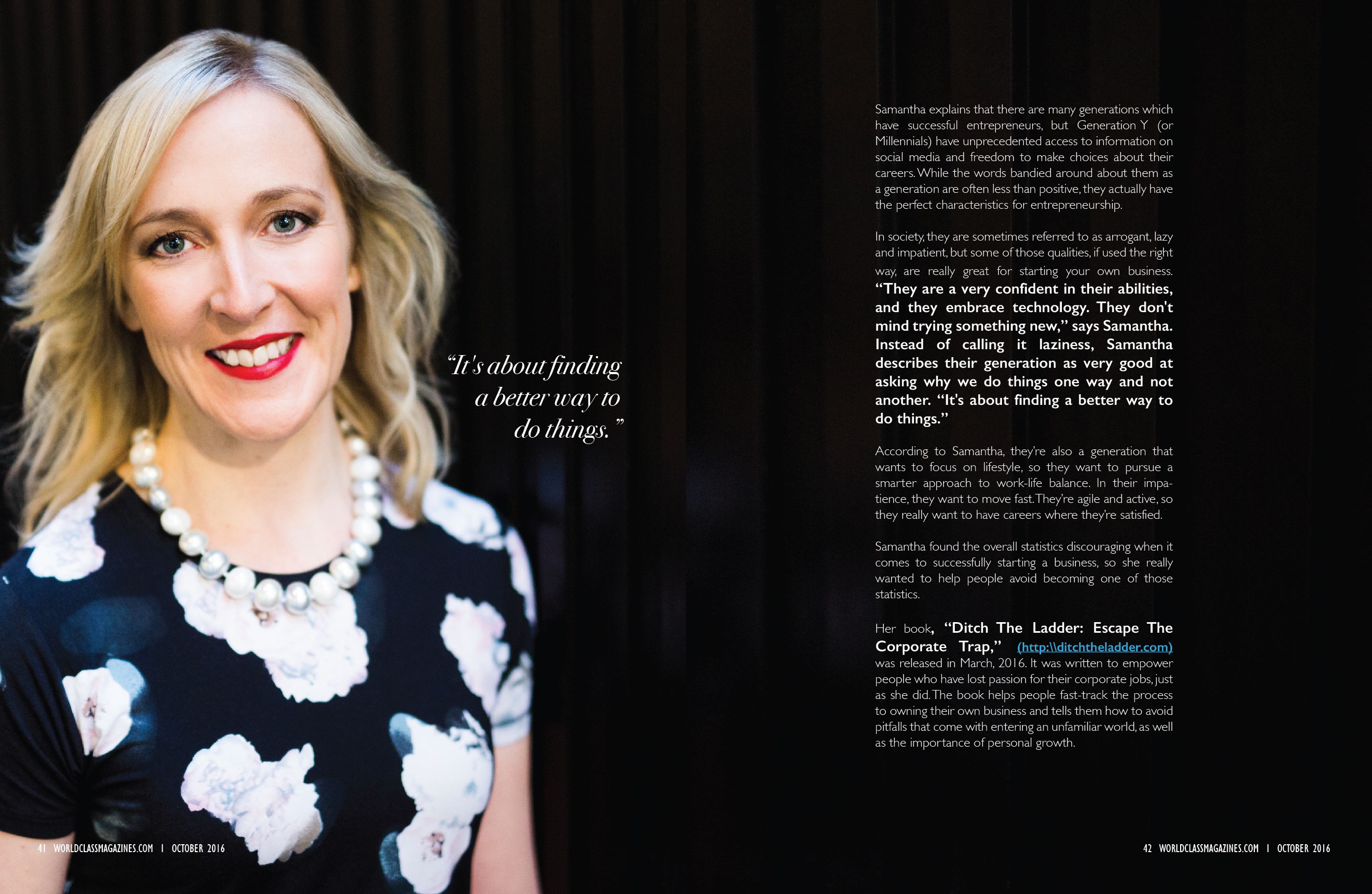 “After a period of time, where I had climbed the corporate ladder, I had some great skills, and I was doing different things, but I wasn’t as fulfilled anymore. I didn’t get the same excitement from going to work. I got to the point where I really dreaded going, and I just didn’t have that desire, so then I had to work out what was going on. I just realised that I wasn’t following the path where I wanted to be in my life, at that time, so I sat down and said, ‘Do I really want to keep on doing what I’m doing until I retire?’ Now I’m doing something in my life that really fulfills my purpose and my why. It’s challenging me and getting me out of my comfort zone regularly,” says Samantha Chambers

Chambers developed her skills and experience in the corporate world for over 20 years in accounting and commerce, as well as project and change management. At one time, she says she wanted to climb the corporate ladder because she hadn’t really been encouraged to become an entrepreneur or to do something on her own. It was more common to move right from school to a job, but the restrictions of having a boss and the long hours, Monday to Friday, eventually had their toll.

The leadership and bosses at the top of the organization always set the strategy for everyone to follow, which obviously needs to be done as part of the governance and structure of an organization, but it can make things hard explains Chambers if you have your own ideas or want to do things differently. While she learned a lot in the corporate world and worked with a lot of great people and companies, which was a great foundation for having a career and being in business, Chambers still wanted more.

Now, she’s helping people transition to entrepreneurship and owning their own businesses. In Chambers’ opinion, being your own boss combines both the personal and business world. It’s more than just a business decision because it involves personal judgment and change in so many areas. She explains that you’ll always get different reactions from family and friends when you leave the security of the corporate world. Some people around you will always judge you, sometimes just out of concern and that can cause you to doubt yourself.

But, sometimes fulfillment requires a drastic change, even though it can be quite challenging personally. In this day in age, Chambers points out, change is something that’s going on all the time, so it needs addressing because it’s always an emotional thing, and as you go through the process of making the change to become your own boss, you’ll go through a number of emotions. It can have an impact on how much time you spend at home too and on your relationships, so you need to manage that change and how you approach your day-to-day personal life.

Chambers also says that you need to learn how to deal with failure and how it impacts your pride and confidence because not everything is going to work out, be it something like a whole business idea, or just a client proposal. “Failure is an instigator for more positive change. It’s a sign to do something differently or maybe a bit better,” says Chambers.

When it comes to starting your own business, she recommends what she calls the three “Ps”: planning, performance and people. When planning, it’s important not to jump in and start too early. You need to understand why you’re doing what you’re doing and get the foundations of your vision in place.

She further explains, there’s never really a perfect time to leave a corporate job. It’s an individual decision, but if you’re frustrated and not fulfilled, the right time is always now. If you wait for the perfect time to make the leap to having your own business, when everything else is in your life is in the right place, you’ll wait forever because there’ll always be something to use for an excuse or a reason to put things off. “It’s just a question of starting today, getting the right advice, and making a move, if you have the drive and motivation to break free, you can have a life that is dictated by you,” says Chambers.

When it comes to performance, Chambers explains it’s really about focusing on discipline. “If you’ve been working in the corporate world for a while, you’re used to there being a structure and there being hierarchies, policies, and procedures that need to be followed. All of a sudden, if you start working for yourself, that structure and discipline becomes loose. There’s no one to look after you. You don’t have a boss. You really need to have a disciplined approach for how you manage your time, and finances, and also managing others as well.”

Finally, the last part of the equation is people, and Chambers emphasizes that it’s important to surround yourself with the best, but you also need a number of different business skills yourself to be on top of everything to get your business going, before you can bring in others to cover different skill sets.

In the corporate world, Chambers explains, we usually associate ourselves with the brand of the organization that we work for, so it’s a big learning curve when we leave that environment to build a brand based on ourselves and our own business, but branding doesn’t have to cost a lot of money, and it isn’t dependent on the size of an organization.

“Things like how you dressed, and what your website looks like can be simple ways to express who you are and what you stand for. You need to be able to tell the story of how you got into your business, what it’s about, and what you want to achieve. It makes connections and gives people insight into who you are, building the kind of credibility and trust you need to be successful,” says Chambers.

But, it’s a common misconception that being your own boss means working on your own. Chambers went on to report that the most successful entrepreneurs have good people around them like coaches, mentors and advisors to help them on their journey and to bounce ideas off of. They provide expertise and clarity on things, or sometimes just provide the motivation to keep going because it can be a real struggle to do everything on your own. The right people can also help get clients and customers as quickly as possible.

Chambers explains that there are many generations which have successful entrepreneurs, but Generation Y and Millennials have unprecedented access to information on social media and freedom to make choices about their careers. While the words bandied about them as a generation are often less than positive, they actually have the perfect characteristics for entrepreneurship as a group.

They are sometimes referred to as arrogant, lazy and impatient, but some of those qualities, if used the right way, are really great for starting your own business. “They are a very confident generation in their abilities, and they embrace technology. They don’t mind trying something new,” says Chambers. Instead of calling it laziness, Chambers describes their generation as very good at asking why we do things one way and not another. “It’s about finding a better way to do things.”

According to Chambers, they’re also a generation that wants to focus on lifestyle, so they have a smarter work-life balance. In their impatience, they want to move fast. They’re agile and active, so they really want to have careers where they’re satisfied.

Chambers found the overall statistics discouraging when it comes to successfully starting a business, so she really wanted to help people avoid becoming one of those statistics. Her upcoming book, “Ditch The Ladder: Escape The Corporate Trap,” (http:\\ditchtheladder.com) will be released in March, 2016. It was written to empower people who have lost passion for their corporate jobs, just as she did. The book helps people fast-track the process to owning their own business and tells them how to avoid pitfalls that come with entering an unfamiliar world, as well as the importance of personal growth.