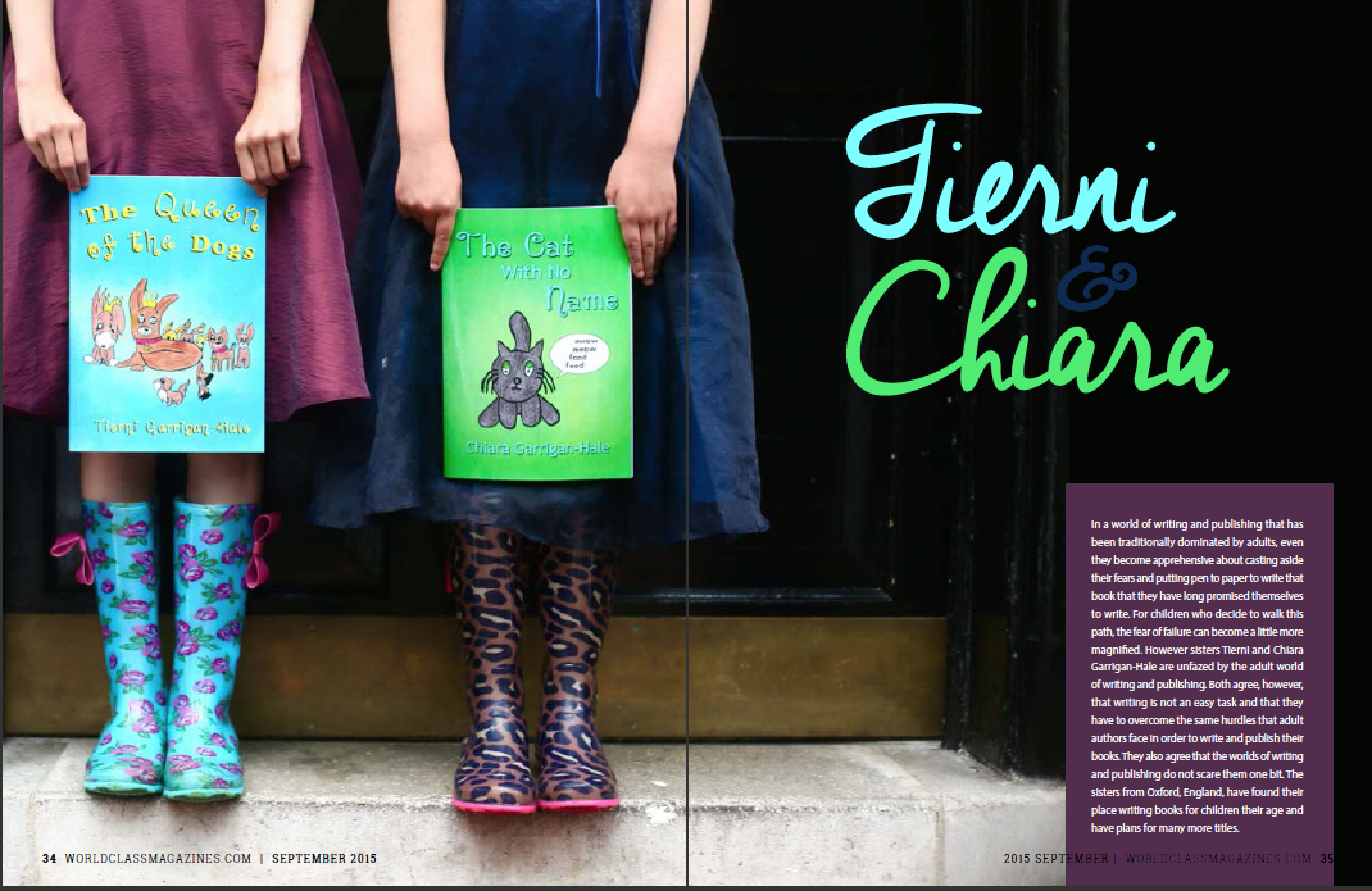 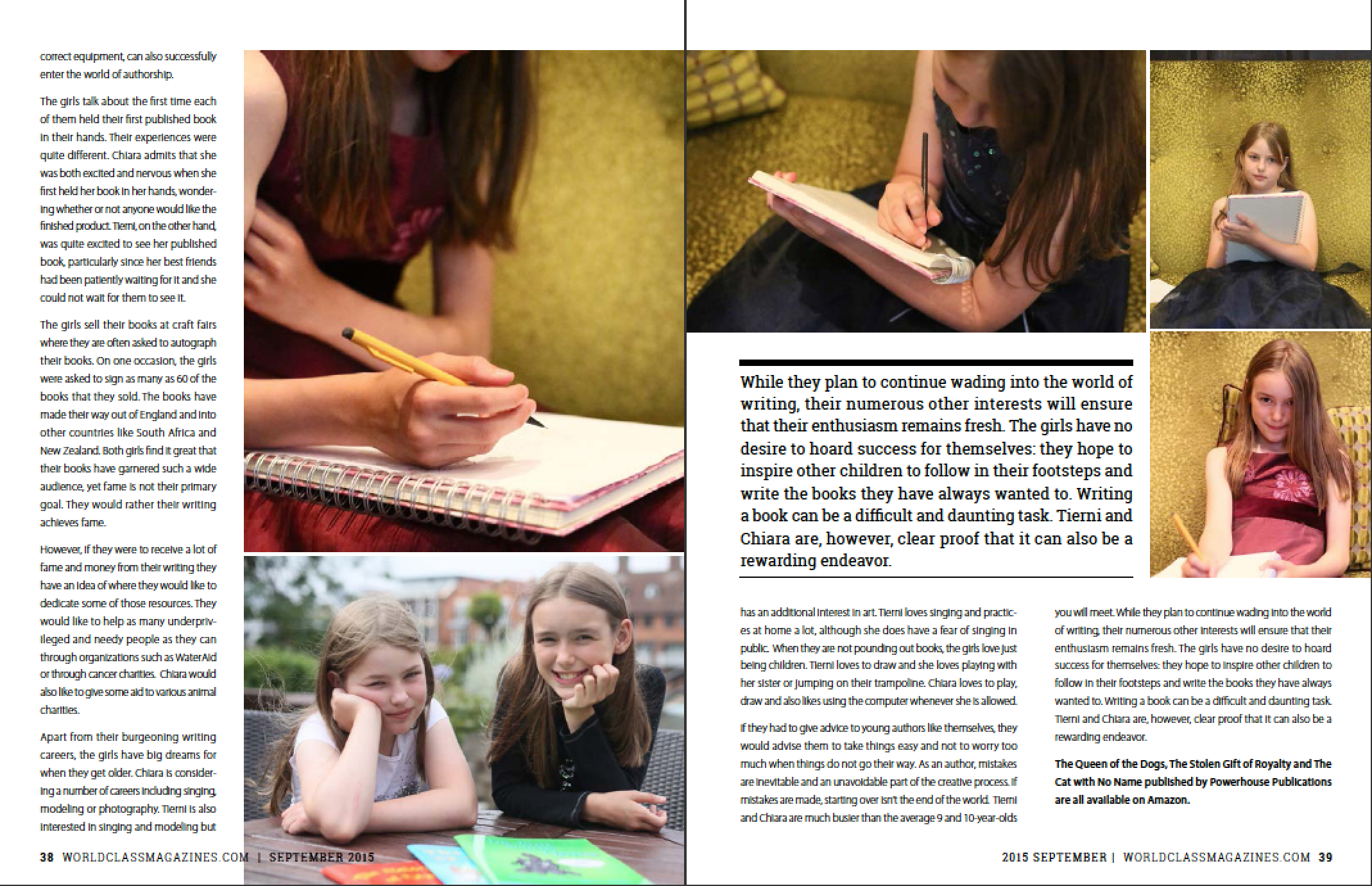 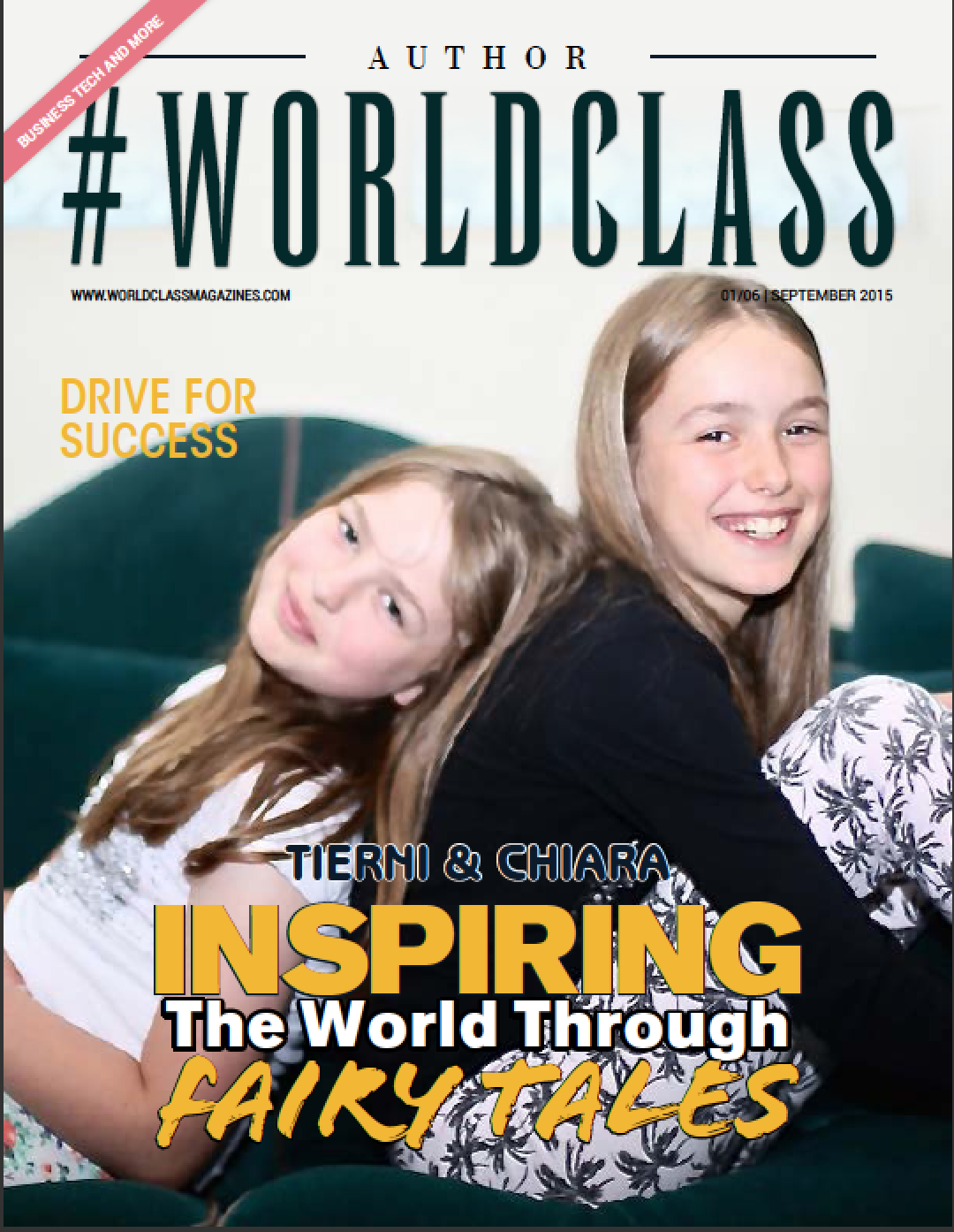 In a world of writing and publishing that has been traditionally dominated by adults, even they become apprehensive about casting aside their fears and putting pen to paper to write that book that they have long promised themselves to write. For children who decide to walk this path, the fear of failure can become a little more magnified. However sisters Tierni and Chiara Garrigan-Hale are unfazed by the adult world of writing and publishing. Both agree, however, that writing is not an easy task and that they have to overcome the same hurdles that adult authors face in order to write and publish their books. They also agree that the worlds of writing and publishing do not scare them one bit. The sisters from Oxford, England, have found their place writing books for children their age and have plans for many more titles.

Tierni, 10, explains that it was bullying that drove her to begin writing books. Being bullied at the hands of others became so intolerable that she got the idea to write a book, hoping that the popularity of her book would win over her bullies. Fortunately, Tierni’s plan worked brilliantly. She has now earned the respect of many of her classmates who once taunted her at school.

So far, Chiara, 9, has written one book titled The Cat with No Name which was inspired by a stray cat that she had seen around her neighborhood.  The cat starts out biting and scratching everyone who tries to help it, but eventually learns to make friends and finds a home. Tierni, on the other hand, has written two books titled The Queen of the Dogs and The Stolen Gift of Royalty which are about a little girl who can talk to dogs and understands their secret language. Both girls admitted that from early on their friends had been excited at the prospect of them writing books. Additionally, when the books had been completed, their friends showered them with positive feedback. Tierni says her next books Royal Wedding and Dognapped will be part of a 12-books series. She has set herself a one-year timeline to complete the first draft for all the books in the series.

Writing is a more difficult task for the girls compared with drawing the illustrations. Chiara acknowledges that it takes a lot of time to get the books ready to be published. Apart from coming up with the story, they must also take the time to type it and draw the illustrations to accompany it. Editing the initial drafts of their books is also time-consuming. Tierni agrees with this, but adds that they are helped by their mother – who they depend upon to liaise with the publishing companies. Despite all the hurdles of writing books, Tierni and Chiara believe that other children, once afforded the correct equipment, can also successfully enter the world of authorship.

The girls talk about the first time each of them held their first published book in their hands. Their experiences were quite different. Chiara admits that she was both excited and nervous when she first held her book in her hands, wondering whether or not anyone would like the finished product. Tierni, on the other hand, was quite excited to see her published book, particularly since her best friends had been patiently waiting for it and she could not wait for them to see it.

The girls sell their books at craft fairs where they are often asked to autograph their books. On one occasion, the girls were asked to sign as many as 60 of the books that they sold. The books have made their way out of England and into other countries like South Africa and New Zealand. Both girls find it great that their books have garnered such a wide audience, yet fame is not their primary goal. They would rather their writing achieves fame. However, if they were to receive a lot of fame and money from their writing they have an idea of where they would like to dedicate some of those resources. They would like to help as many underprivileged and needy people as they can through organizations such as WaterAid or through cancer charities.  Chiara would also like to give some aid to various animal charities.

Apart from their burgeoning writing careers, the girls have big dreams for when they get older. Chiara is considering a number of careers including singing, modeling or photography. Tierni is also interested in singing and modeling but has an additional interest in art. Tierni loves singing and practices at home a lot, although she does have a fear of singing in public.

When they are not pounding out books, the girls love just being children. Tierni loves to draw and she loves playing with her sister or jumping on their trampoline. Chiara loves to play, draw and also likes using the computer whenever she is allowed.

If they had to give advice to young authors like themselves, they would advise them to take things easy and not to worry too much when things do not go their way. As an author, mistakes are inevitable and an unavoidable part of the creative process. If mistakes are made, starting over isn’t the end of the world.

Tierni and Chiara are much busier than the average 9 and 10-year-olds you will meet. While they plan to continue wading into the world of writing, their numerous other interests will ensure that their enthusiasm remains fresh. The girls have no desire to hoard success for themselves: they hope to inspire other children to follow in their footsteps and write the books they have always wanted to. Writing a book can be a difficult and daunting task. Tierni and Chiara are, however, clear proof that it can also be a rewarding endeavor.

The Queen of the Dogs, The Stolen Gift of Royalty and The Cat with No Name are all available on Amazon.