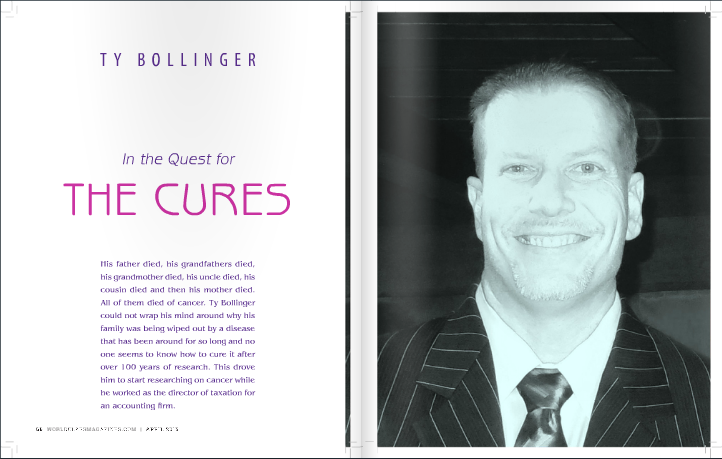 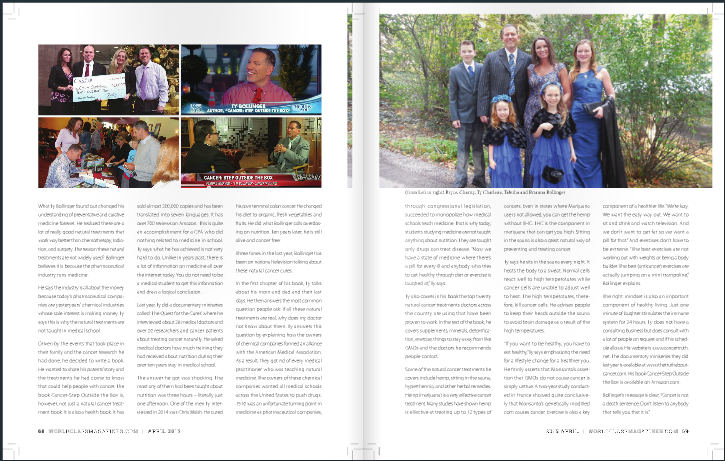 TY BOLLINGER: IN THE QUEST FOR THE CURES

The Truth About Cancer: A Global Quest – The True History of Chemo & The Pharmaceutical Monopoly

His father died, his grandfathers died, his grandmother died, his uncle died, his cousin died and then his mother died. All of them died of cancer. Ty Bollinger could not wrap his mind around why his family was being wiped out by a disease that has been around for so long and no one seems to know how to cure it after over 100 years of research. This drove him to start researching on cancer while he worked as the director of taxation for an accounting firm.

What Ty Bollinger found out changed his understanding of preventative and curative medicine forever. He realized there are a lot of really good natural treatments that work way better than chemotherapy, radiation, and surgery. The reason these natural treatments are not widely used? Bollinger believes it is because the pharmaceutical industry runs medicine. He says the industry is all about the money because today’s pharmaceutical companies are yesteryears’ chemical industries whose sole interest is making money. Ty says this is why the natural treatments are not taught in medical school.

Driven by the events that took place in their family and the cancer research he had done, he decided to write a book. He wanted to share his parents’ story and the treatments he had come to know that could help people with cancer. The book Cancer-Step Outside the Box is, however, not just a natural cancer treatment book. It is also a health book. It has sold almost 200,000 copies and has been translated into seven languages. It has over 700 reviews on Amazon.

This is quite an accomplishment for a CPA who did nothing related to medicine in school. Ty says what he has achieved is not very hard to do. Unlike in years past, there is a lot of information on medicine all over the internet today. You do not need to be a medical student to get this information and draw a logical conclusion.
Last year, Ty did a documentary miniseries called ‘The Quest for the Cures’ where he interviewed about 28 medical doctors and over 20 researchers and cancer patients about treating cancer naturally. He asked medical doctors how much training they had received about nutrition during their over ten years stay in medical school. The answer he got was shocking. The most any of them had been taught about nutrition was three hours – literally just one afternoon.

One of the men Ty interviewed in 2014 was Chris Walsh. He cured his own terminal colon cancer. He changed his diet to organic, fresh vegetables and fruits. He did what Bollinger calls overdosing on nutrition. Ten years later, he is still alive and cancer free.

Three times in the last year, Bollinger has been on national television talking about these natural cancer cures.
In the first chapter of his book, Ty talks about his mom and dad and their last days. He then answers the most common question people ask: if all these natural treatments are real, why does my doctor not know about them. Ty answers this question by explaining how the owners of chemical companies formed an alliance with the American Medical Association. As a result, they got rid of every medical practitioner who was teaching natural medicine. The owners of these chemical companies wanted all medical schools across the United States to push drugs. 1910 was an unfortunate turning point in medicine as pharmaceutical companies, through congressional legislation, succeeded to monopolize how medical schools teach medicine. That is why today, students studying medicine are not taught anything about nutrition. They are taught only drugs can treat disease.
“Now we have a state of medicine where there’s a pill for every ill and anybody who tries to get healthy through diet or exercise is laughed at,” Ty says.

Ty also covers in his book the top twenty natural cancer treatments doctors across the country are using that have been proven to work. In the rest of the book, he covers supplements, minerals, detoxification, exercise, things to stay away from like GMOs and the doctors he recommends people contact.
Some of the natural cancer treatments he covers include hemp, sitting in the sauna, hypothermia, and other herbal remedies. Hemp (marijuana) is a very effective cancer treatment. Many studies have shown hemp is effective at treating up to 12 types of cancers. Even in states where Marijuana use is not allowed, you can get the hemp without THT. THT is the component in marijuana that can get you high.

Sitting in the sauna is also a great natural way of preventing and treating cancer. Ty says he sits in the sauna every night. It hits the body to a sweat. Normal cells react well to high temperatures while cancer cells are unable to adjust well to heat. The high temperatures, therefore, kill cancer cells. He advises people to keep their heads outside the sauna to avoid brain damage as a result of the high temperatures.
“If you want to be healthy, you have to eat healthy,” Ty says emphasizing the need for a lifestyle change for a healthier you. He firmly asserts that Monsanto’s assertion that GMOs do not cause cancer is simply untrue. A two-year study conducted in France showed quite conclusively that Monsanto’s genetically modified corn causes cancer.
Exercise is also a key component of a healthier life. “We’re lazy. We want the easy way out. We want to sit and drink and watch television. And we don’t want to get fat so we want a pill for that.”

And exercises don’t have to be extreme. “The best exercises are not working out with weights or being a body builder. The best (anticancer) exercises are actually jumping on a mini trampoline,” Bollinger explains.
The right mindset is also an important component of healthy living. Just one minute of laughter stimulates the immune system for 24 hours.
Ty does not have a consulting business but does consult with a lot of people on request and if his schedule allows. His website is www.cancertruth.net. The documentary miniseries they did last year is available at www.thetruthaboutcancer.com. His book Cancer-Step Outside the Box is available on Amazon.com.
Bollinger’s message is clear, “Cancer is not a death sentence. Don’t listen to anybody that tells you that it is.”