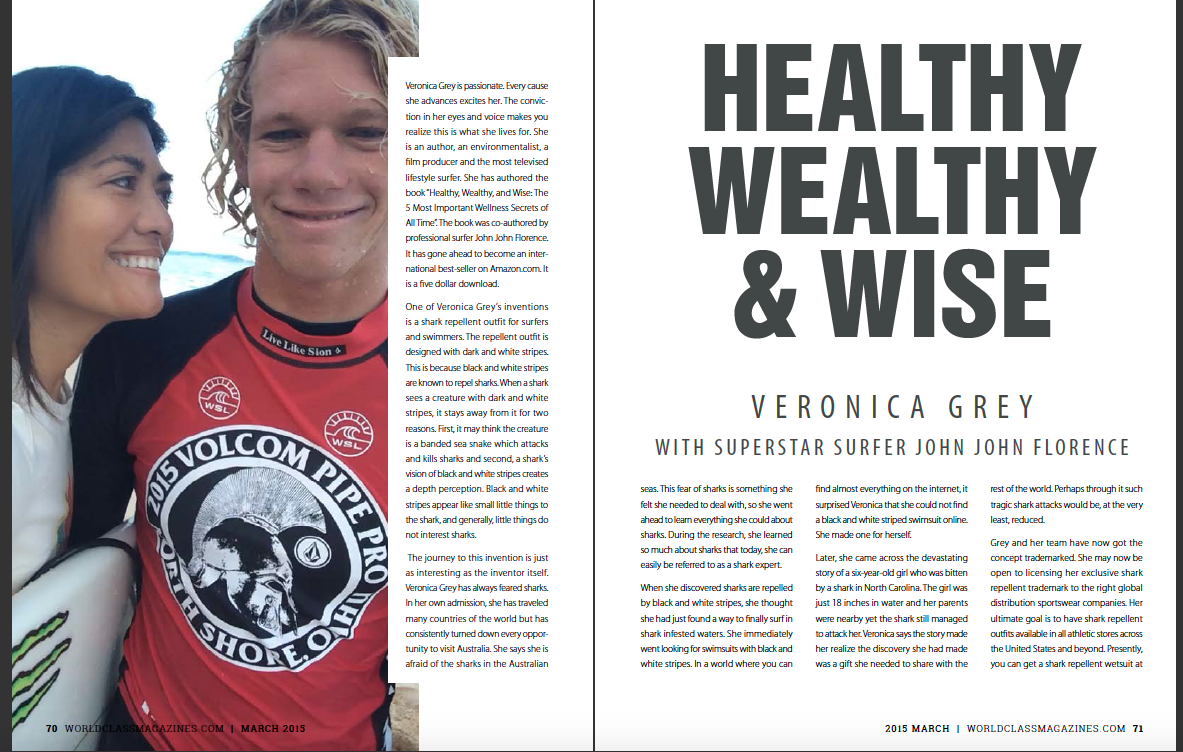 Veronica Grey is passionate. Every cause she advances excites her. The conviction in her eyes and voice makes you realize this is what she lives for. She is an author, an environmentalist, a film producer and the most televised lifestyle surfer. She has authored the book “Healthy, Wealthy, and Wise: The 5 Most Important Wellness Secrets of All Time”. The book was inspired by professional surfer John John Florence. It has gone ahead to become an international best-seller on Amazon.com. It is a five dollar download.

The journey to this invention is just as interesting as the invention itself. Veronica Grey has always feared sharks. In her own admission, she has traveled many countries of the world but has consistently turned down every opportunity to visit Australia. She says she is afraid of the sharks in the Australian seas. This fear of sharks is something she felt she needed to deal with, so she went ahead to learn everything she could about sharks. During the research, she learned so much about sharks that today, she can easily be referred to as a shark expert. 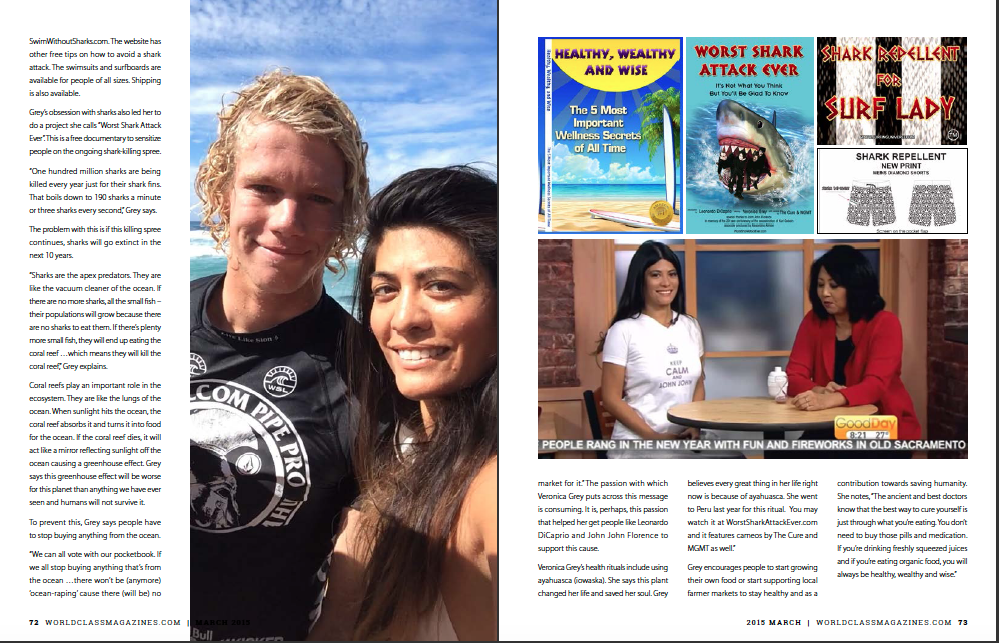 Later, she came across the devastating story of a six-year-old girl who was bitten by a shark in North Carolina. The girl was just 18 inches in water and her parents were nearby yet the shark still managed to attack her. Veronica says the story made her realize the discovery she had made was a gift she needed to share with the rest of the world. Perhaps through it such tragic shark attacks would be, at the very least, reduced.

Grey and her team have now got the concept trademarked. She now hopes to get a company to license her shark repellent trademark. Her ultimate goal is to have shark repellent outfits available in all athletic stores across the United States and beyond. Presently, you can get a shark repellent wetsuit at SwimWithoutSharks.com. The website has other free tips on how to avoid a shark attack. The wetsuits and surfboards are available for people of all sizes. Shipping is also available.

Grey’s obsession with sharks also led her to do a project she calls “Worst Shark Attack Ever”. This is a free documentary to sensitize people on the ongoing shark-killing spree.

“One hundred million sharks are being killed every year just for their shark fins. That boils down to 190 sharks a minute or three sharks every second,” Grey says.

The problem with this is if this killing spree continues, sharks will go extinct in the next 10 years.

Coral reefs play an important role in the ecosystem. They are like the lungs of the ocean. When sunlight hits the ocean, the coral reef absorbs it and turns it into food for the ocean. If the coral reef dies, it will act like a mirror reflecting sunlight off the ocean causing a greenhouse effect. Grey says this greenhouse effect will be worse for this planet than anything we have ever seen and humans will not survive it. 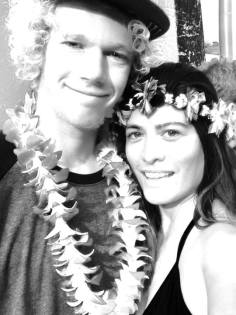 To prevent this, Grey says people have to stop buying anything from the ocean.

“We can all vote with our pocketbook. If we all stop buying anything that’s from the ocean …there won’t be (anymore) ‘ocean-raping’ cause there (will be) no market for it.”

The passion with which Veronica Grey puts across this message is consuming. It is, perhaps, this passion that helped her get people like Leonardo DiCaprio and John John Florence to support this cause.

Veronica Grey’s health rituals include using ayahuasca (iowaska). She says this plant changed her life and saved her soul. Grey believes every great thing in her life right now is because of ayahuasca. She went to Peru last year for this ritual.

Grey encourages people to start growing their own food or start supporting local farmer markets to stay healthy and as a contribution towards saving humanity.

She notes, “The ancient and best doctors know that the best way to cure yourself is just through what you’re eating. You don’t need to buy those pills and medication. If you’re drinking freshly squeezed juices and if you’re eating organic food, you will always be healthy, wealthy and wise.”