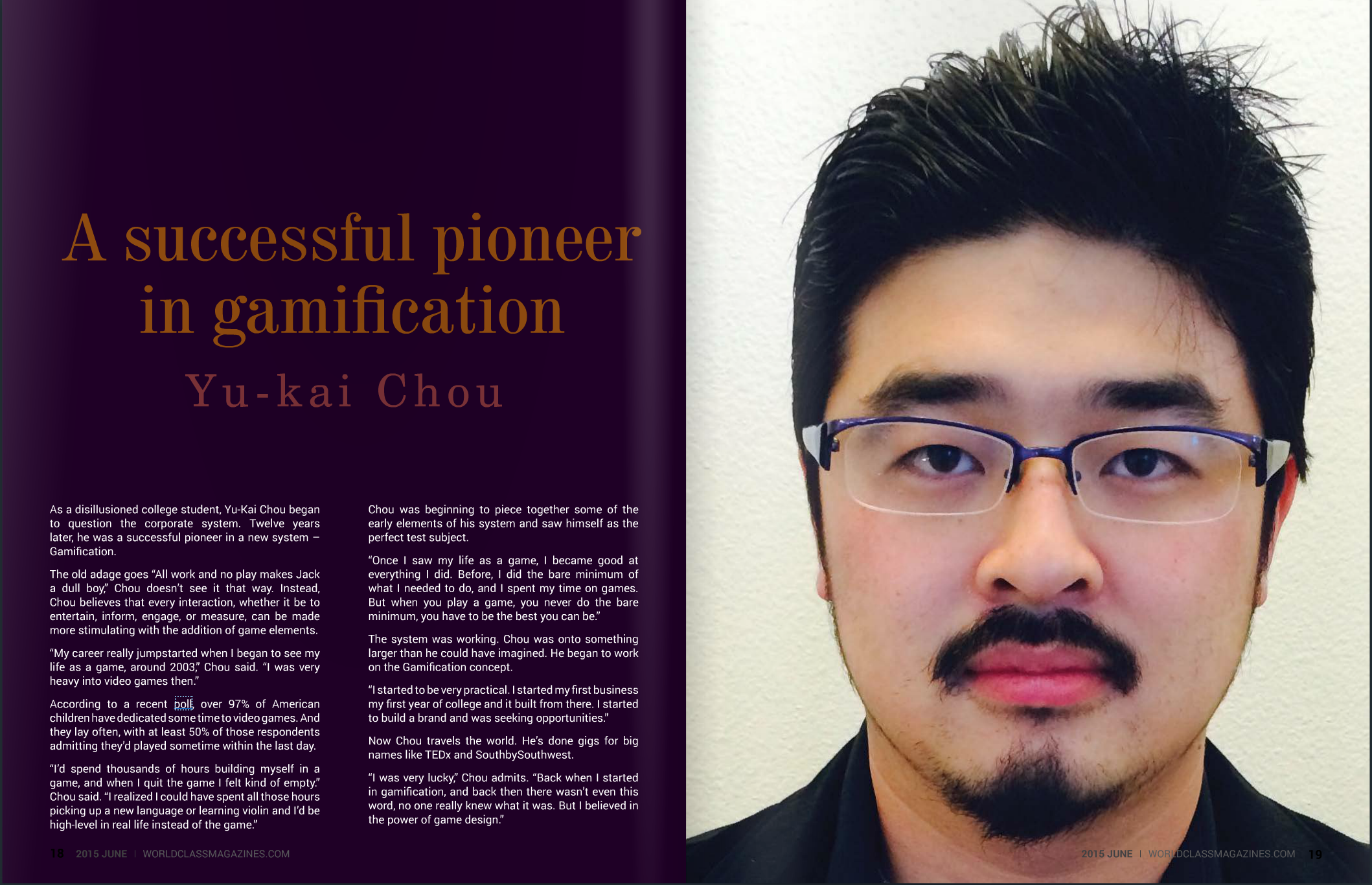 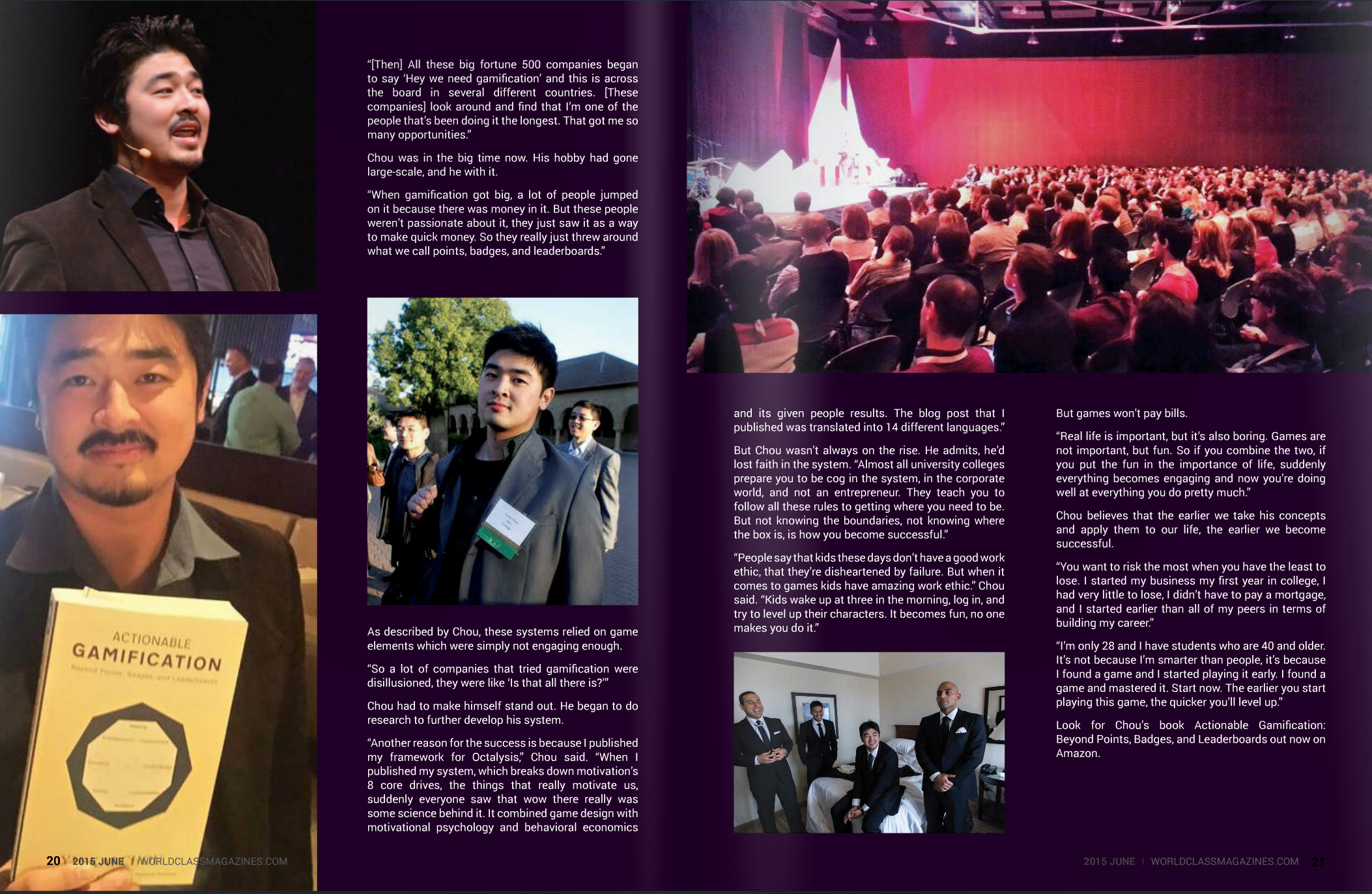 As a disillusioned college student, Yu-Kai Chou began to question the corporate system. Twelve years later, he was a successful pioneer in a new system – Gamification.

The old adage goes “All work and no play makes Jack a dull boy,” Chou doesn’t see it that way. Instead, Chou believes that every interaction, whether it be to entertain, inform, engage, or measure, can be made more stimulating with the addition of game elements.

“My career really jumpstarted when I began to see my life as a game, around 2003,” Chou said. “I was very heavy into video games then.”

According to a recent poll, over 97% of American children have dedicated some time to video games. And they lay often, with at least 50% of those respondents admitting they’d played sometime within the last day.

“I’d spend thousands of hours building myself in a game, and when I quit the game I felt kind of empty.” Chou said. “I realized I could have spent all those hours picking up a new language or learning violin and I’d be high-level in real life instead of the game.”

Chou was beginning to piece together some of the early elements of his system and saw himself as the perfect test subject.

“Once I saw my life as a game, I became good at everything I did. Before, I did the bare minimum of what I needed to do, and I spent my time on games. But when you play a game, you never do the bare minimum, you have to be the best you can be.”

The system was working. Chou was onto something larger than he could have imagined. He began to work on the Gamification concept.

“I was very lucky,” Chou admits. “Back when I started in gamification, and back then there wasn’t even this word, no one really knew what it was. But I believed in the power of game design.”

“[Then] All these big fortune 500 companies began to say ‘Hey we need gamification’ and this is across the board in several different countries. [These companies] look around and find that I’m one of the people that’s been doing it the longest. That got me so many opportunities.”

Chou was in the big time now. His hobby had gone large-scale, and he with it.

“When gamification got big, a lot of people jumped on it because there was money in it. But these people weren’t passionate about it, they just saw it as a way to make quick money. So they really just threw around what we call points, badges, and leaderboards.”

As described by Chou, these systems relied on game elements which were simply not engaging enough.

“So a lot of companies that tried gamification were disillusioned, they were like ‘Is that all there is?’”

Chou had to make himself stand out. He began to do research to further develop his system.

“Another reason for the success is because I published my framework for Octalysis,” Chou said. “When I published my system, which breaks down motivation’s 8 core drives, the things that really motivate us, suddenly everyone saw that wow there really was some science behind it. It combined game design with motivational psychology and behavioral economics and its given people results. The blog post that I published was translated into 14 different languages.”

But Chou wasn’t always on the rise. He admits, he’d lost faith in the system. “Almost all university colleges prepare you to be cog in the system, in the corporate world, and not an entrepreneur. They teach you to follow all these rules to getting where you need to be. But not knowing the boundaries, not knowing where the box is, is how you become successful.”

“People say that kids these days don’t have a good work ethic, that they’re disheartened by failure. But when it comes to games kids have amazing work ethic.” Chou said. “Kids wake up at three in the morning, log in, and try to level up their characters. It becomes fun, no one makes you do it.”

“Real life is important, but it’s also boring. Games are not important, but fun. So if you combine the two, if you put the fun in the importance of life, suddenly everything becomes engaging and now you’re doing well at everything you do pretty much.”

“You want to risk the most when you have the least to lose. I started my business my first year in college, I had very little to lose, I didn’t have to pay a mortgage, and I started earlier than all of my peers in terms of building my career.”

“I’m only 28 and I have students who are 40 and older. It’s not because I’m smarter than people, it’s because I found a game and I started playing it early. I found a game and mastered it. Start now. The earlier you start playing this game, the quicker you’ll level up.”

Look for Chou’s book Actionable Gamification: Beyond Points, Badges, and Leaderboards out now on Amazon.