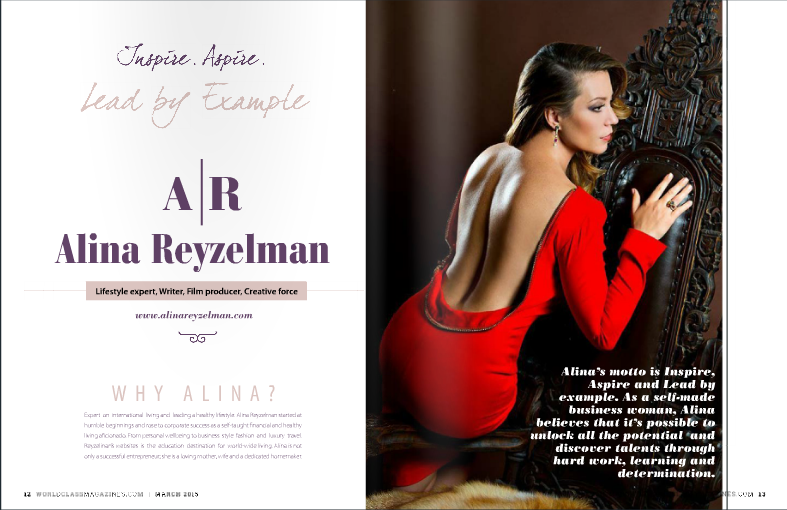 Gender Doesn’t Matter As Much As Attitude

The lives of women are fraught with challenges. That is a story that is universal throughout the world, but the life-story of women as individuals will always be unique and poignant. Alina Reyzelman brings us the story of the struggles of three such women in Moscow, Russia, in her new documentary, “A Girl & The City.” Although the women in the film are from diverse social and economic backgrounds, their stories bring to light many core issues that are a matter of course for women generally, such as: discrimination, financial disparity, neglect, under-employment and child-care, particularly for working and single mothers. As an important complement to that, female entrepreneurs and business women were also invited to participate and discuss these problems, to bring forward their opinions and experiences. 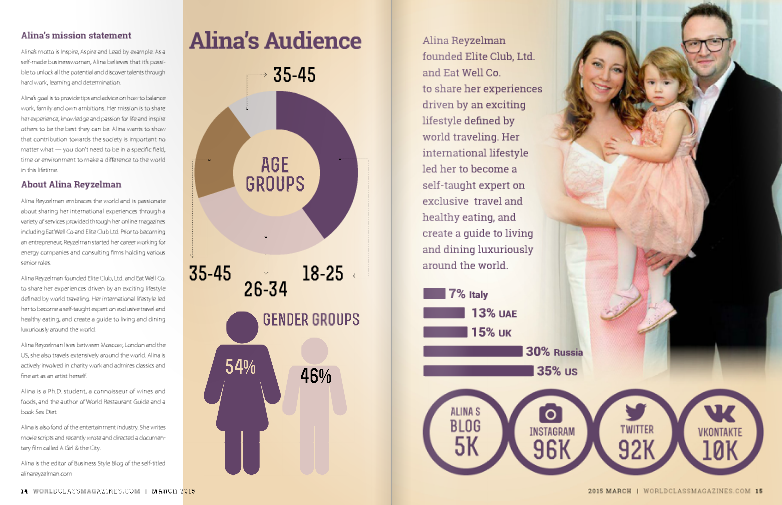 “Women should constantly challenge their management, by agreeing to worse conditions, women lose And I think there is also another side of the feminism issue . . . The right way is to discuss matters in a constructive and productive way. At the end of the day, gender doesn’t matter, what matters is the person, skills and attitude,” Alina Reyzelman.

Added interest is provided by the participation of Russian politician Boris Nemtsov, who was also interviewed for the film. It was one of his last recorded interviews before he was shot. Reyzelman wrote, directed and produced the documentary. It will be released with English subtitles later this year and will be available through iTunes and Netflix, in the United States. The trailer is available at: https://www.youtube.com/watch?v=RxkRJdzcilE

Alina Reyzelman styles herself an, “entrepreneur, businesswoman, film producer, and writer, who is crazy about everything creative. That kind of optimism and dedication is a driving force in both her business and home life. Living between Moscow, London and the US, she is truly an active citizen of the world, as well as a successful entrepreneur, and a loving wife and mother. Her life, like that of many women, is a constant juggling act to give equal time and energy to both work and home. 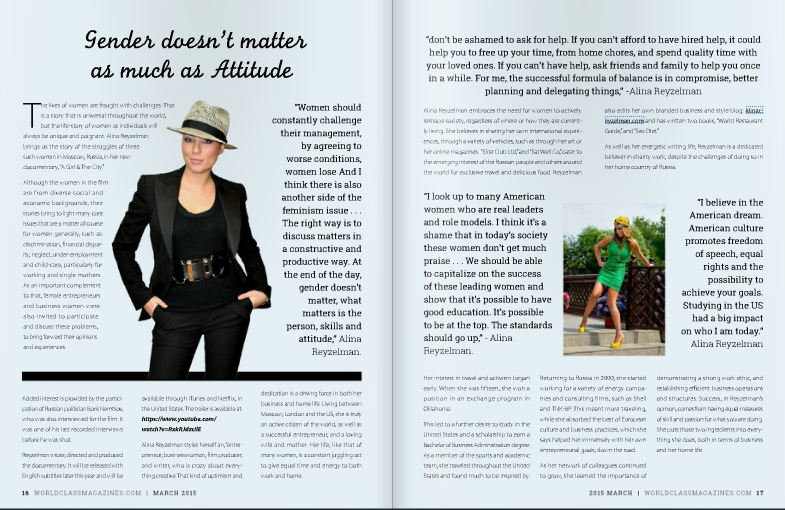 “don’t be ashamed to ask for help. If you can’t afford to have hired help, it could help you to free up your time, from home chores, and spend quality time with your loved ones. If you can’t have help, ask friends and family to help you once in a while. For me, the successful formula of balance is in compromise, better planning and delegating things,”Alina Reyzelman

Alina Reyzelman embraces the need for women to actively reshape society, regardless of where or how they are currently living. She believes in sharing her own international experiences, through a variety of vehicles, such as through her art or her online magazines. “Elite Club Ltd,” and “Eat Well Co,” cater to the emerging interest of the Russian people and others around the world for exclusive travel and delicious food. Reyzelman also edits her own branded business and style blog: alinareyzelman.com and has written two books, “World Restaurant Guide,” and “Sex Diet.” As well as her energetic writing life, Reyzelman is a dedicated believer in charity work, despite the challenges of doing so in her home country of Russia.

“I look up to many American women who are real leaders and role models. I think it’s a shame that in today’s society these women don’t get much praise . . . We should be able to capitalize on the success of these leading women and show that it’s possible to have good education. It’s possible to be at the top. The standards should go up,” Alina Reyzelman.

Her interest in travel and activism began early. When she was fifteen, she won a position in an exchange program in Oklahoma. This led to a further desire to study in the United States and a scholarship to earn a Bachelor of Business Administration degree. As a member of the sports and academic team, she traveled throughout the United States and found much to be inspired by.

“I believe in the American dream. American culture promotes freedom of speech, equal rights and the possibility to achieve your goals. Studying in the US had a big impact on who I am today.” Alina Reyzelman.

Returning to Russia in 2000, she started working for a variety of energy companies and consulting firms, such as Shell and TNK-BP. This meant more traveling, while she absorbed the best of European culture and business practices, which she says helped her immensely with her own entrepreneurial goals, down the road. As her network of colleagues continued to grow, she learned the importance of demonstrating a strong work ethic, and establishing efficient business operations and structures. Success, in Reyzelman’s opinion, comes from having equal measures of skill and passion for what you are doing. She puts those two ingredients into everything she does, both in terms of business and her home life.