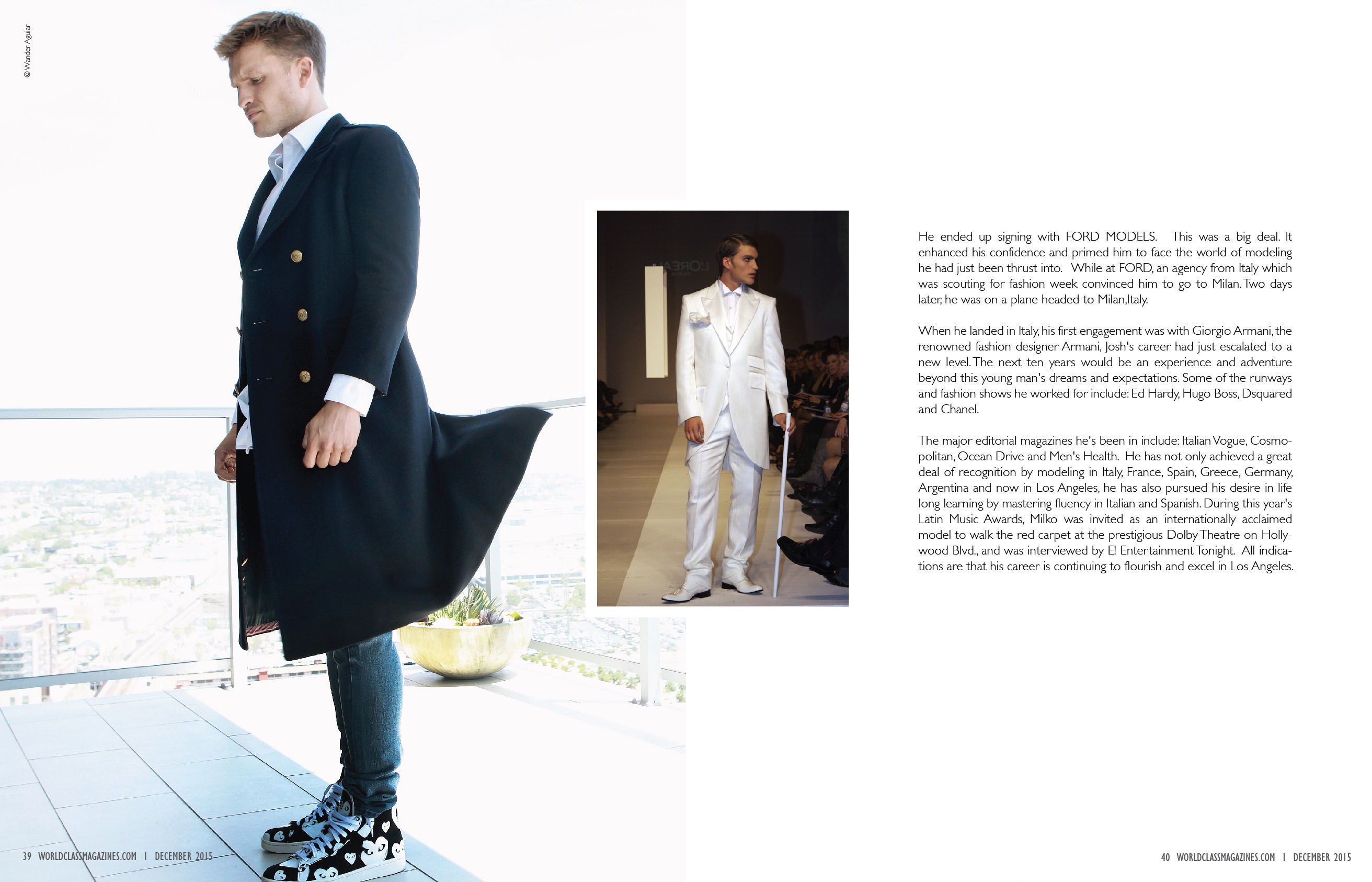 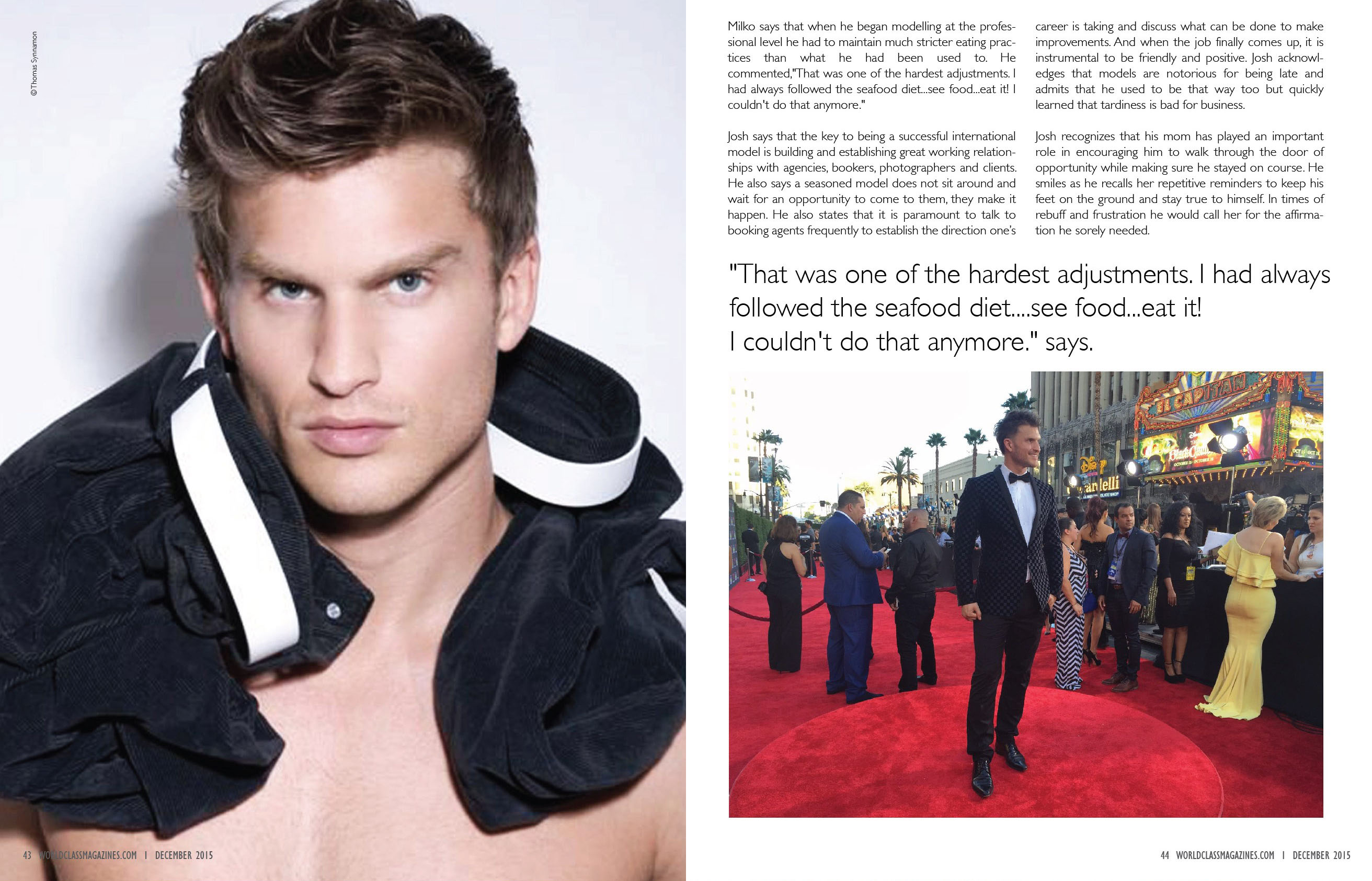 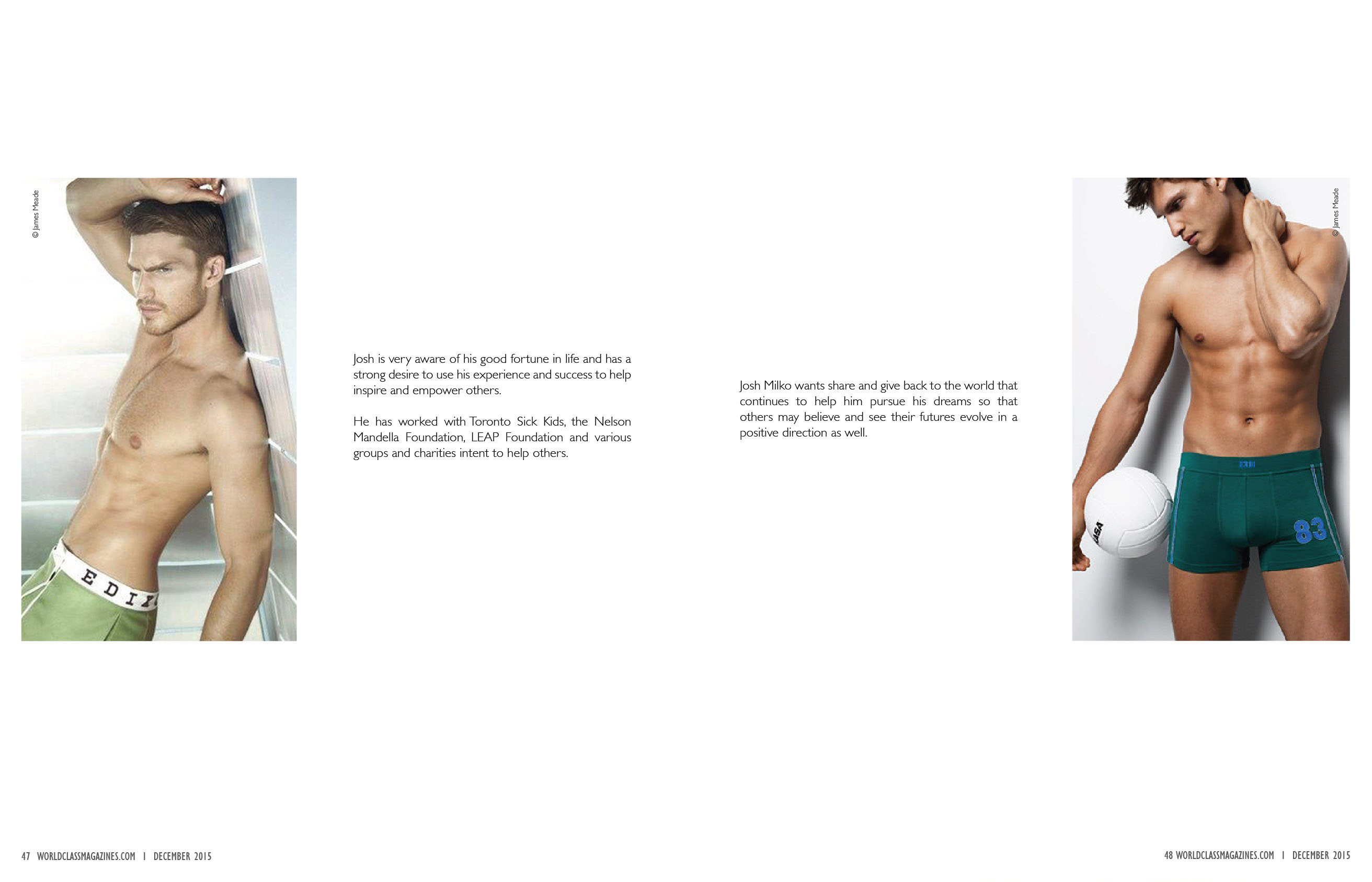 To the majority of people, models are viewed no further than skin deep. Qualities of intelligence, ambition, kindness and integrity are often not regarded, yet Josh Milko says these are just some of the virtues that proved critical to success in the  international world of modeling. In this cutthroat profession, Milko has had to live by these virtues to stand out. To survive and do well in the business, a model has to learn to maintain great relationships with bookers, agencies, and photographers. For the last decade, he has experienced the glamor and the not so glamorous sides of modeling and has been tremendously successful.

Looking at Josh Milko, it is hard to envision the shy, small town schoolboy he once was. The most obvious thing that strikes one is not just his tasteful confidence, but his easy going, good natured presence with a splash of style that he naturally exhibits today. The thirty year old model did not always exude such confidence and says that it grew along with his self esteem by playing and excelling in high school sports  and hitting free weights in the gym back in his hometown.

Upon graduation, Josh’s world was about to change in a way that neither he nor his family had ever even entertained. At nineteen years of age, Milko was discovered by an international model scout in Winnipeg, Manitoba as he was heading home from the supermarket.

Josh comes from the small city of Kenora which is located on the north shore of Lake of the Woods in Ontario, Canada but he had relocated to attend the University of Winnipeg. He was studying film and production in pursuit of his dream to one day become a movie producer. After the encounter with the modeling scout and with encouragement from a  modeling agency in Winnipeg, Josh was selected for fashion show runways, commercial catalogues and a national talent competition for modeling and acting. His immediate success and recognition opened a door of opportunity previously completely foreign to any thoughts and aspirations contemplated in his high school years. After careful deliberation and family conference, Josh completed the university year, borrowed money from his mom to fly to Toronto, and met with several of the leading modeling agencies.

The transition was swift and surreal. Josh received offers from all the top agencies in Toronto and felt fortunate to have the ability to select his favorite.

He ended up signing with FORD MODELS. This was a big deal. It enhanced his confidence and primed him to face the world of modeling he had just been thrust into. While at FORD, an agency from Italy which was scouting for fashion week convinced him to go to Milan. Two days later, he was on a plane headed to Milan,Italy.

When he landed in Italy, his first engagement was with Giorgio Armani, the renowned fashion designer. Armani, the renowned fashion designer. Josh’s career had just escalated to a new level. The next ten years would be an experience and adventure beyond this young man’s dreams and expectations. Some of the runways and fashion shows he worked for include: Ed Hardy, Hugo Boss, Dsquared and Chanel. The major editorial magazines he’s been in include: Italian Vogue, Cosmopolitan, Ocean Drive and Men’s Health. He has not only achieved a great deal of recognition by modeling in Italy, France, Spain, Greece, Germany, Argentina and now in Los Angeles, he has also pursued his desire in life long learning by mastering fluency in Italian and Spanish. During this year’s Latin Music Awards, Milko was invited as an internationally acclaimed model to walk the red carpet at the prestigious Dolby Theatre on Hollywood Blvd., and was interviewed by E! Entertainment Tonight.   All indications are that his career is continuing to flourish and excel in Los Angeles.

“The modeling industry is far from being without challenges and disappointment. “Castings can be intimidating, especially early in one’s career. Competition is always huge and relentless rejections are the norm.” Milko states. At times there were hundreds of models up for the same job.  In addition, the apartments furnished by his agencies were far from ideal. His first “model apartment” was shared with five Brazilian models in an apartment meant to house a married couple.

He has been told ‘no’ many times, but Josh says his positive outlook has helped him navigate the stormy waters of the industry.

Milko says that when he began modelling at the professional level he had to maintain much stricter eating practices than what he had been used to. He commented,”That was one of the hardest adjustments. I had always followed the seafood diet….see food and eat it! I couldn’t do that anymore.”

Josh says that the key to being a successful international model is building and establishing great working relationships with agencies, bookers, photographers and clients. He also says a seasoned model does not sit around and wait for an opportunity to come to them, they make it happen. He also states that it is paramount to talk to booking agents frequently to establish the direction one’s career is taking and discuss what can be done to make improvements. And when the job finally comes up, it is instrumental to be friendly and positive. Josh acknowledges that models are notorious for being late and admits that he used to be that way too but quickly learned that tardiness is bad for business.

Josh recognizes that his mom has played an important role in encouraging him to walk through the door of opportunity while making sure he stayed on course. He smiles as he recalls her repetitive reminders to keep his feet on the ground and stay true to himself. In times of rebuff and frustration he would call her for the affirmation he sorely needed.

Josh is very aware of his good fortune in life and has a strong desire to use his experience and success to help inspire and empower others. He has worked with Toronto Sick Kids, the Nelson Mandella Foundation, LEAP Foundation and various groups and charities intent to help others. Josh Milko wants share and give back to the world that continues to help him pursue his dreams so that others may believe and see their futures evolve in a positive direction as well. Model and mentor…we will surely be hearing more from this man.