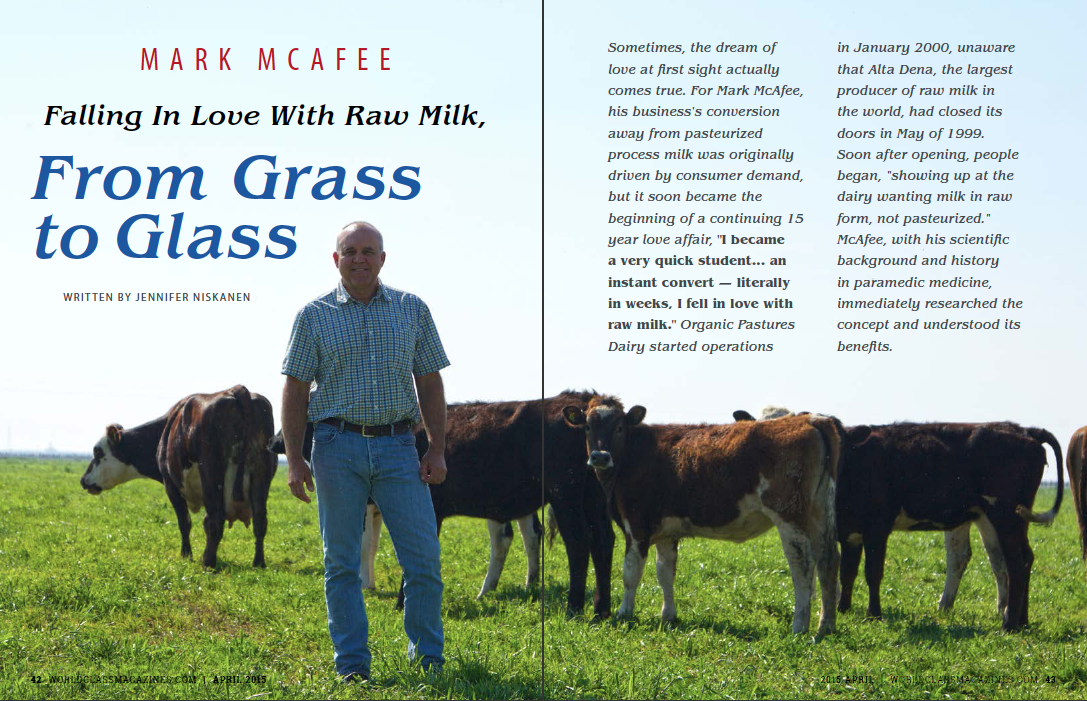 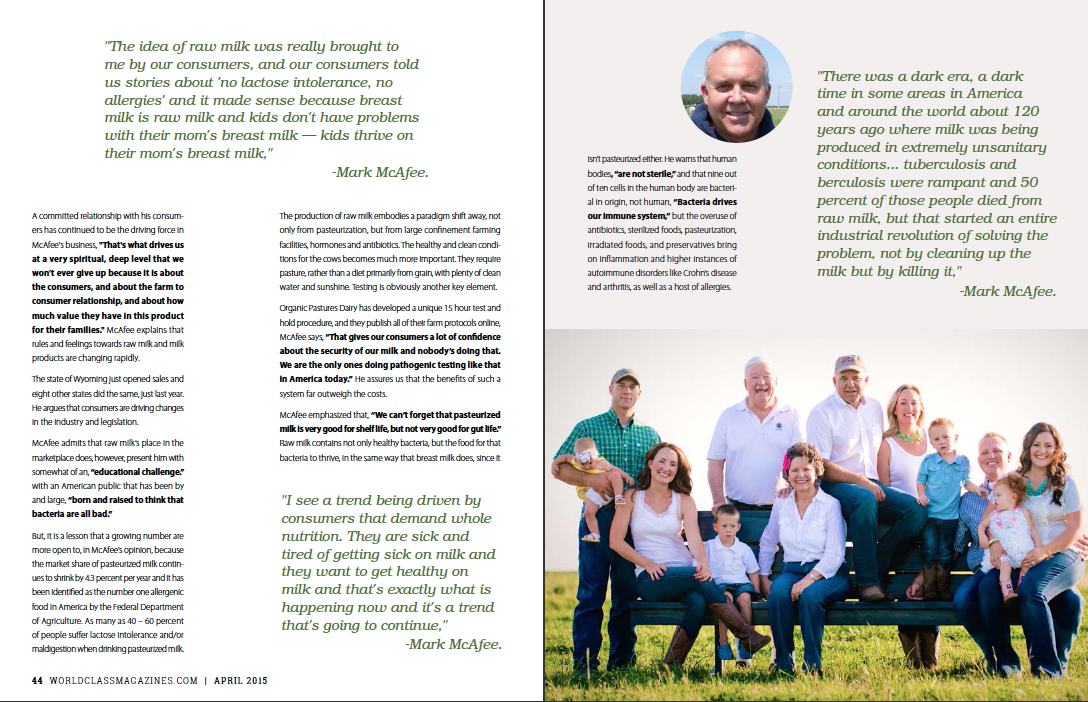 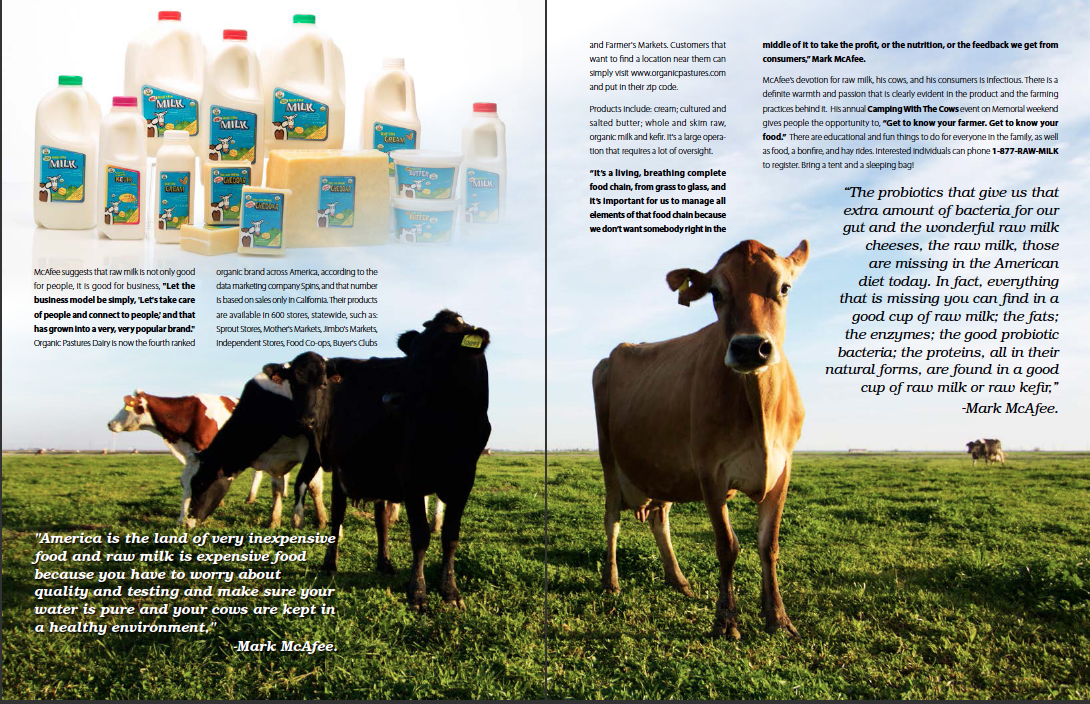 Mark McAfee: Falling In Love With Raw Milk, From Grass To Glass

Sometimes, the dream of love at first sight actually comes true. For Mark McAfee, his business’s conversion away from pasteurized process milk was originally driven by consumer demand, but it soon became the beginning of a continuing 15 year love affair, “I became a very quick student . . . an instant convert — literally in weeks, I fell in love with raw milk.” Organic Pastures Dairy started operations in January 2000, unaware that Alta Dena, the largest producer of raw milk in the world, had closed its doors in May of 1999. Soon after opening, people began, “showing up at the dairy wanting milk in raw form, not pasteurized.” McAfee, with his scientific background and history in paramedic medicine, immediately researched the concept and understood its benefits. 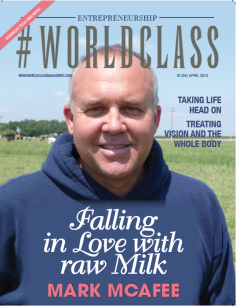 A committed relationship with his consumers has continued to be the driving force in McAfee’s business, “That’s what drives us at a very spiritual, deep level that we won’t ever give up because it is about the consumers, and about the farm to consumer relationship, and about how much value they have in this product for their families.” McAfee explains that rules and feelings towards raw milk and milk products are changing rapidly. The state of Wyoming just opened sales and eight other states did the same, just last year. He argues that consumers are driving changes in the industry and legislation.

“I see a trend being driven by consumers that demand whole nutrition. They are sick and tired of getting sick on milk and they want to get healthy on milk and that’s exactly what is happening now and it’s a trend that’s going to continue,” Mark McAfee.

McAfee admits that raw milk’s place in the marketplace does, however, present him with somewhat of an, “educational challenge.” with an American public that has been by and large, “born and raised to think that bacteria are all bad.” But, it is a lesson that a growing number are more open to, in McAfee’s opinion, because the market share of pasteurized milk continues to shrink by 4.3 percent per year and it has been identified as the number one allergenic food in America by the Federal Department of Agriculture. As many as 40 – 60 percent of people suffer lactose intolerance and/or maldigestion when drinking pasteurized milk.

“There was a dark era, a dark time in some areas in America and around the world about 120 years ago where milk was being produced in extremely unsanitary conditions . . . tuberculosis and berculosis were rampant and 50 percent of those people died from raw milk, but that started an entire industrial revolution of solving the problem, not by cleaning up the milk but by killing it,” Mark McAfee.

The production of raw milk embodies a paradigm shift away, not only from pasteurization, but from large confinement farming facilities, hormones and antibiotics. The healthy and clean conditions for the cows becomes much more important. They require pasture, rather than a diet primarily from grain, with plenty of clean water and sunshine. Testing is obviously another key element. Organic Pastures Dairy has developed a unique 15 hour test and hold procedure, and they publish all of their farm protocols online, McAfee says, “That gives our consumers a lot of confidence about the security of our milk and nobody’s doing that. We are the only ones doing pathogenic testing like that in America today.” He assures us that the benefits of such a system far outweigh the costs.

“America is the land of very inexpensive food and raw milk is expensive food because you have to worry about quality and testing and make sure your water is pure and your cows are kept in a healthy environment,” Mark McAfee.

McAfee emphasized that, “We can’t forget that pasteurized milk is very good for shelf life, but not very good for gut life.” Raw milk contains not only healthy bacteria, but the food for that bacteria to thrive, in the same way that breast milk does, since it isn’t pasteurized either. He warns that human bodies, “are not sterile,” and that nine out of ten cells in the human body are bacterial in origin, not human, “Bacteria drives our immune system,” but the overuse of antibiotics, sterilized foods, pasteurization, irradiated foods, and preservatives bring on inflammation and higher instances of autoimmune disorders like Crohn’s disease and arthritis, as well as a host of allergies.

“The probiotics that give us that extra amount of bacteria for our gut and the wonderful raw milk cheeses, the raw milk, those are missing in the American diet today. In fact, everything that is missing you can find in a good cup of raw milk; the fats; the enzymes; the good probiotic bacteria; the proteins, all in their natural forms, are found in a good cup of raw milk or raw kefir,” Mark McAfee.

McAfee suggests that raw milk is not only good for people, it is good for business, “Let the business model be simply, ‘Let’s take care of people and connect to people,’ and that has grown into a very, very popular brand.” Organic Pastures Dairy is now the fourth ranked organic brand across America, according to the data marketing company Spins, and that number is based on sales only in California. Their products are available in 600 stores, statewide, such as: Sprout Stores, Mother’s Markets, Jimbo’s Markets, Independent Stores, Food Co-ops, Buyer’s Clubs and Farmer’s Markets. Customers that want to find a location near them can simply visit www.organicpastures.com and put in their zip code. Products include: cream; cultured and salted butter; whole and skim raw, organic milk and kefir. It’s a large operation that requires a lot of oversight.

“It’s a living, breathing complete food chain, from grass to glass, and it’s important for us to manage all elements of that food chain because we don’t want somebody right in the middle of it to take the profit, or the nutrition, or the feedback we get from consumers,” Mark McAfee.

McAfee’s devotion for raw milk, his cows, and his consumers is infectious. There is a definite warmth and passion that is clearly evident in the product and the farming practices behind it. His annual Camping With The Cows event on Memorial weekend gives people the opportunity to, “Get to know your farmer. Get to know your food.” There are educational and fun things to do for everyone in the family, as well as food, a bonfire, and hay rides. Interested individuals can phone 1-877-RAW-MILK to register. Bring a tent and a sleeping bag!