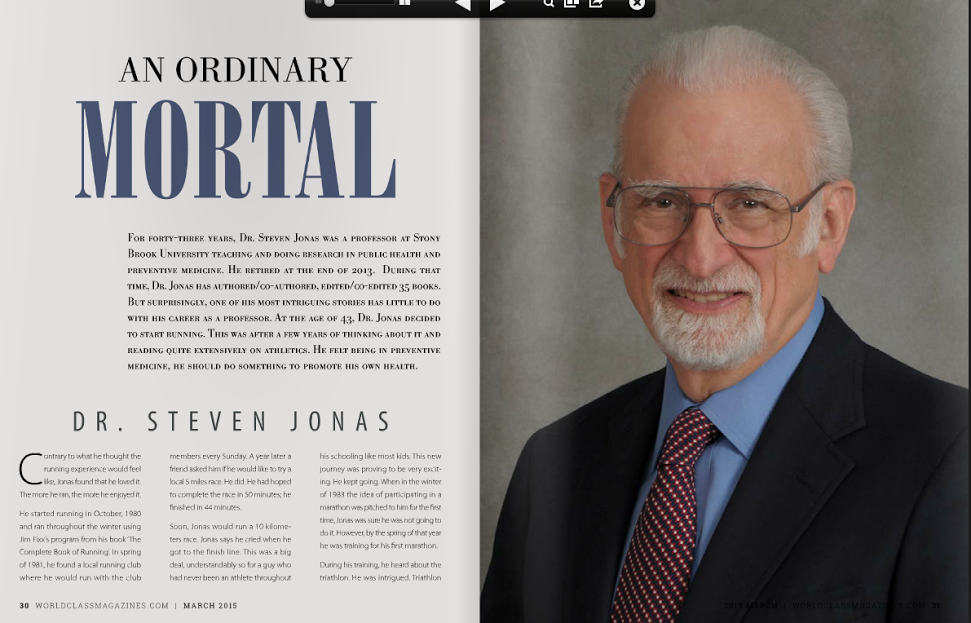 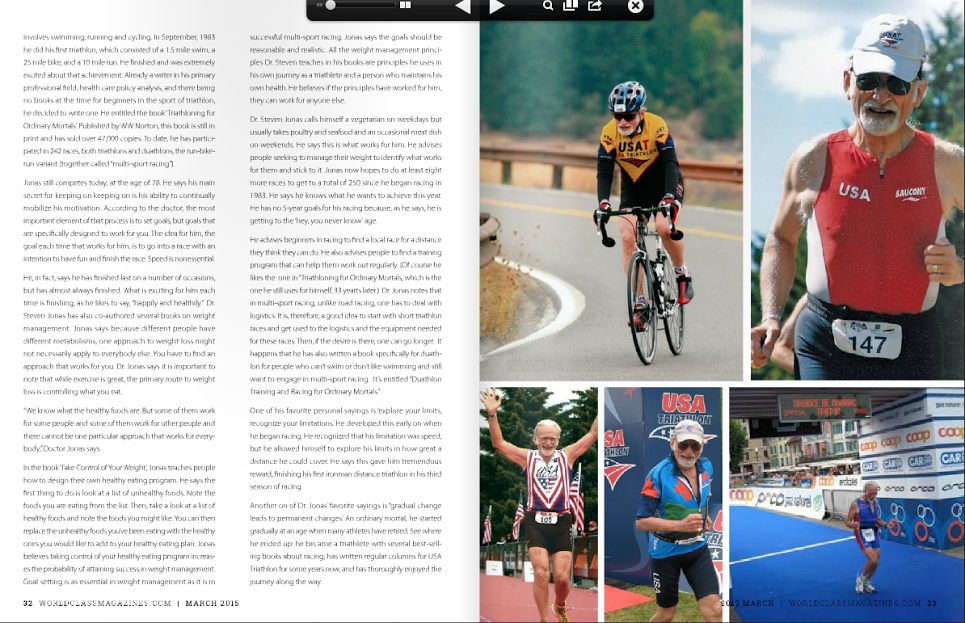 For forty-three years, Dr. Steven Jonas was a professor at Stony Brook University teaching and doing research in public health and preventive medicine. He retired at the end of 2013.  During that time, Dr. Jonas has authored/co-authored, edited/co-edited 35 books.  But surprisingly, one of his most intriguing stories has little to do with his career as a professor. At the age of 43, Dr. Jonas decided to start running. This was after a few years of thinking about it and reading quite extensively on athletics. He felt being in preventive medicine, he should do something to promote his own health.

Contrary to what he thought the running experience would feel like, Jonas found that he loved it. The more he ran, the more he enjoyed it. He started running in October, 1980 and ran throughout the winter using Jim Fixx’s program from his book ‘The Complete Book of Running’. In spring of 1981, he found a local running club where he would run with the club members every Sunday. A year later a friend asked him if he would like to try a local 5 miles race. He did. He had hoped to complete the race in 50 minutes; he finished in 44 minutes.

Soon, Jonas would run a 10 kilometers race. Jonas says he cried when he got to the finish line. This was a big deal, understandably so for a guy who had never been an athlete throughout his schooling like most kids. This new journey was proving to be very exciting. He kept going. When in the winter of 1983 the idea of participating in a marathon was pitched to him for the first time, Jonas was sure he was not going to do it. However, by the spring of that year he was training for his first marathon.

During his training, he heard about the triathlon. He was intrigued. Triathlon involves swimming, running and cycling. In September, 1983 he did his first triathlon, which consisted of a 1.5 mile swim, a 25 mile bike, and a 10 mile run. He finished and was extremely excited about that achievement. Already a writer in his primary professional field, health care policy analysis, and there being no books at the time for beginners in the sport of triathlon, he decided to write one. He entitled the book ‘Triathloning for Ordinary Mortals’. Published by WW Norton, this book is still in print and has sold over 47,000 copies. To date, he has participated in 242 races, both triathlons and duathlons, the run-bike-run variant (together called “multi-sport racing”).

Jonas still competes today, at the age of 78. He says his main secret for keeping on keeping on is his ability to continually mobilize his motivation. According to the doctor, the most important element of that process is to set goals, but goals that are specifically designed to work for you. The idea for him, the goal each time that works for him, is to go into a race with an intention to have fun and finish the race. Speed is nonessential. He, in fact, says he has finished last on a number of occasions, but has almost always finished. What is exciting for him each time is finishing, as he likes to say, “happily and healthily.”

Dr. Steven Jonas has also co-authored several books on weight management. Jonas says because different people have different metabolisms, one approach to weight loss might not necessarily apply to everybody else. You have to find an approach that works for you. Dr. Jonas says it is important to note that while exercise is great, the primary route to weight loss is controlling what you eat.

Goal setting is as essential in weight management as it is in successful multi-sport racing. Jonas says the goals should be reasonable and realistic. All the weight management principles Dr. Steven teaches in his books are principles he uses in his own journey as a triathlete and a person who maintains his own health. He believes if the principles have worked for him, they can work for anyone else.

Dr. Steven Jonas calls himself a vegetarian on weekdays but usually takes poultry and seafood and an occasional meat dish on weekends. He says this is what works for him. He advises people seeking to manage their weight to identify what works for them and stick to it.

Jonas now hopes to do at least eight more races to get to a total of 250 since he began racing in 1983. He says he knows what he wants to achieve this year. He has no 5-year goals for his racing because, as he says, he is getting to the ‘hey, you never know’ age.

He advises beginners in racing to find a local race for a distance they think they can do. He also advises people to find a training program that can help them work out regularly. (Of course he likes the  one in “Triathloning for Ordinary Mortals, which is the one he still uses for himself, 33 yearts later.)  Dr. Jonas notes that in multi-sport racing, unlike road racing, one has to deal with logistics. It is, therefore, a good idea to start with short triathlon races and get used to the logistics and the equipment needed for these races. Then, if the desire is there, one can go longer.  It happens that he has also written a book specifically for duathlon for people who can’t swim or don’t like swimming and still want to engage in multi-sport racing.  It’s entitled “Duathlon Training and Racing for Ordinary Mortals.”

One of his favorite personal sayings is ‘explore your limits, recognize your limitations.’ He developed this early on when he began racing. He recognized that his limitation was speed, but he allowed himself to explore his limits in how great a distance he could cover. He says this gave him tremendous reward, finishing his first ironman distance triathlon in his third season of racing.

Another on of Dr. Jonas’ favorite sayings is “gradual change leads to permanent changes.’ An ordinary mortal, he started gradually at an age when many athletes have retired. See where he ended up: he became a triathlete with several best-selling books about racing, has written regular columns for USA Triathlon for some years now, and has thoroughly enjoyed the journey along the way.